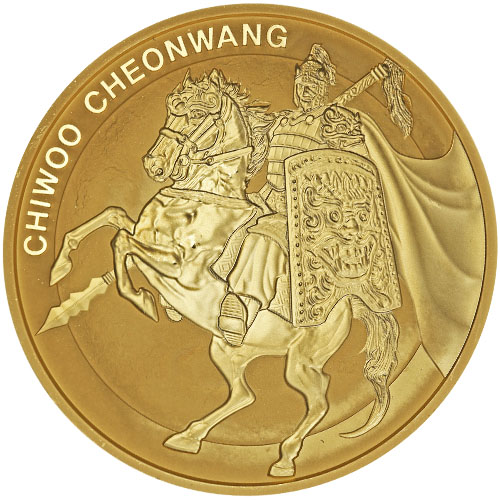 One of the newest silver and gold bullion programs comes from the Republic of Korea’s sovereign mint. Better known as South Korea, the program from the nation’s KOMSCO mint features a Korean cultural deity rumored to have the power to scare opponents in war with magic and confuse them with control over the weather. Right now, 2017 1 oz Gold South Korean Chiwoo Cheonwang coins are available to purchase online at Silver.com.

Each of the 2017 1 oz Gold South Korean Chiwoo Cheonwang products available here are in BU condition. Coins in this condition exhibit no signs of wear and tear, but aren’t free of minor flaws. These flaws are limited in nature to breaks in the luster, spotted surfaces, or contact marks as a result of the coining process.

KOMSCO introduced the Chiwoo Cheonwang Series in 2016 with a silver product followed by a gold. The gold coins in this release have special mintage figures that reflect the year of issue. The original coins, struck in 2016, had a mintage of 2,016. This year’s 2017 issue has a matching mintage figure of just 2,017. Other options in the Chiwoo Series included fractional-weight 1/10 oz Gold Chiwoos with a low mintage of just 25,000 in total.

The obverse of the 2017 1 oz Gold South Korean Chiwoo Cheonwang features the battle shield carried by Chiwoo Cheonwang, who was known in Korean culture and lore as the God of War. He is said to have possessed a range of magical powers he used to frighten his enemies on the field of war, including the potential to control the weather and confuse his opponents by changing it to fit his forces.

On the reverse of the 2017 Gold Chiwoo Cheonwang is the altered image of Chiwoo. For the 2016 release, his figure was featured in full battle regalia standing on the field of war. The 2017 issue puts Chiwoo in his full battle regalia on the back of his war horse, allowing him to lead his troops on the charge into battle.

KOMSCO, or Korea Minting and Security Printing Corporation, is a government-owned entity that was established in 1951 to produced coinage and other official government paperwork for South Korea.