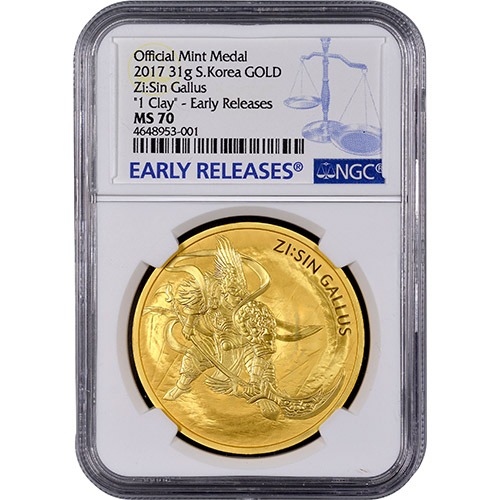 KOMSCO introduced a brand-new series of silver and gold bullion for sale in 2017. Building upon the success of its Chiwoo Cheonwang Series debut in 2016, KOMSCO added to its Chiwoo collection and showcased the first releases of the new Zi:Sin Series. Known as the Twelve Guardians collection, the first of these designs featured Gallus. The 2017 1 oz Gold South Korean Zi:Sin Gallus Medal is now available to you online for purchase at Silver.com with NGC certification.

Zi:Sin is a series of 12 medals representing the Twelve Guardians of Korean lore. The Twelve Guardians serve as the leaders and commanders of god’s armies on the field of battle against the forces of evil. They roam the battlefield, dispersing wind and rain with a unique ability to transform into human and animal forms to scare off demons. Each one has their own mythical powers.

The first release of the Zi:Sin Series of silver and gold medals is that of Gallus. Known as the messenger of light, Gallus can summon a blinding light to terrify the enemies of God while also unleashing a deafening roar that scares away any remaining evil spirits on the field of battle. His battle helmet has a high point, which is rumored to give him the power to foresee upcoming events.

On the obverse of the 2017 1 oz Gold South Korean Zi:Sin Gallus Medal is the image of Gallus in his battle armor. The only engraving on this side is that of “Zi:Sin Gallus.” Gallus is the first of the Twelve Guardians in the collection and he guards one of the 12 directions as he watches for evil.

The reverse of the Gold South Korean Zi:Sin Gallus Medal features the image of Do ggae bi. A mythical figure, Do ggae bi is a unique Korean figure who is believed to have been either a ghost, monster, or god similar to the hob-goblins of Western society. Do ggae bi’s image was often hung from the edges of homes as a stronger spirit to scare away evil doers.

All 2017 1 oz Gold South Korean Zi:Sin Gallus Medals in this listing are in Mint State 70 condition. MS70 medals have full, original mint luster and no detracting flaws. The Early Release designation is reserved for products that arrive at the NGC within 30 days of their initial release date.