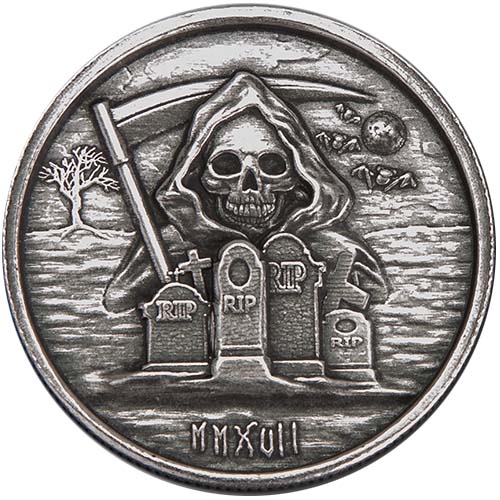 If you find yourself walking down the street and an imposing figure in dark robes carrying a scythe approaches, it’s time to run for the hills! If, however, you see this figure on a silver precious metal product you can breathe a sigh of relief because you’re looking at a brand-new silver round offering from Monarch Precious Metals. Right now, 2017 1 oz Silver Monarch Grim Reaper Rounds are available to purchase online at Silver.com.

The Grim Reaper is a manifestation of mankind’s greatest fear: death. Different cultures have interpreted death differently. For example, Ancient Greeks found death to be inevitable and therefore he was not portrayed as a purely evil being. For that matter, he was not portrayed in the manner many Western societies do in the modern world.

Various depictions of death are available from around the world. The Ancient Greeks saw him as a bearded and winged man. Celtic folklore actually portrayed death as the spirit of the last person from a community to die. Most Western societies envisioned death as a skeleton figure. Monarch Precious Metals takes on one of the most common depictions for its newest silver round.

On the obverse of the limited-edition 2017 1 oz Silver Monarch Grim Reaper Round you’ll find the popular image of the reaper wearing long black robes and carrying a massive scythe in one hand. His figure emerges from behind a series of headstones, each with the engraving of Rest In Peace, or “RIP” on the face of them. Also included on this face of the round is the Roman numeral engraving for the 2017 year of issue, “MMXVII.”

Although the Grim Reaper is often referred to as a man, there are examples of death as a female form. Slavic mythology viewed death as a woman known as Marzanna, while Norse mythology had the famed Valkyries who took the dead to the afterlife.

The reverse of all Silver Monarch Grim Reaper Rounds includes engravings of the weight, purity, and metal content of each individual round in the collection.

Monarch Precious Metals opened in 2008 in the Rogue Valley of Oregon to answer the growing demand for silver and gold precious metals during the Great Recession. Today it carries on with its impressive release of silver bars and rounds that attract investors and collectors alike.

If you have questions, please don’t hesitate to ask. Silver.com customer service is available to you at 888-989-7223, online using our live web chat, and via our email address. The silver spot price today is available all day, every day on our website.