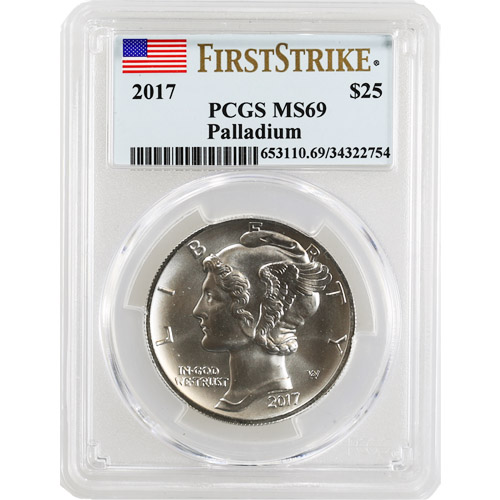 As of 2017, the United States Mint’s American Eagle bullion series features four metallic options. The oldest coins in the series are the Gold Eagle and Silver Eagle bullion specimens introduced in 1986. Over a decade later, the Platinum Eagle joined the collection in the late 1990s. In 2017, the Palladium Eagle joined the fray. Now, 2017 1 oz Palladium American Eagles are available to you for purchase online at Silver.com in near-perfect condition.

Much of the delay came down to the high demand at the time for gold and silver coins in the series. Between 2010 and 2015, the Silver Eagle Series set several sales records, including back-to-back years in 2014 and 2015. With demand for other metals cooling down in 2017, the US Mint took the opportunity to get the Palladium Eagle into production.

The obverse side of 2017 1 oz Palladium Eagles features a depiction of Winged Liberty. This left-profile bust of Liberty depicts her figure with a winged Phrygian cap on her head, giving rise to the popular term of Mercury Dime for the US dime that this design originally appeared on. The coin was commonly referred to by that name for Liberty’s resemblance to Mercury, the Roman messenger god.

On the reverse of 2017 Palladium American Eagles is a design from the 1907 American Institute of Architect’s gold medal. The image shows the bald eagle perched on the edge of a cliff as it clutches a small sapling in its talons.

These 2017 1 oz Palladium American Eagles are Mint State 69 specimens. Coins in this condition showcase full, original mint luster with no more than two minor detractions. Examples of these flaws are limited to minuscule contact marks or hairlines that must be located outside the primary focal points of the coin. First Strike coins are those received within 30 days of the original release date.

Silver.com customer service is available to assist you at 888-989-7223. Alternatively, you can chat with us live online or simply send us an email.