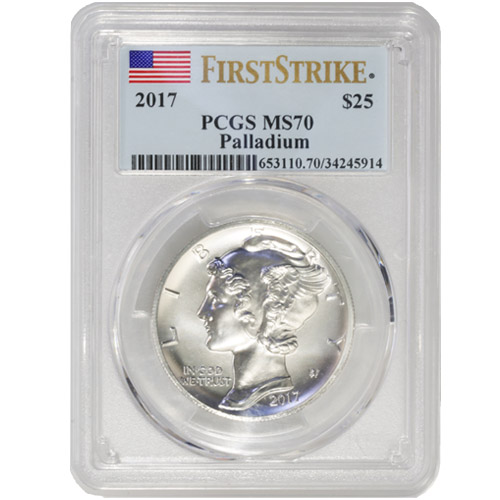 Palladium is one of the Earth’s rarest precious metals. A member of the platinum metals group, palladium was discovered in 1803 and is currently used in a number of different industries and applications. The most common use for palladium, outside of precious metals, is in the production of catalytic converters for internal combustion automobiles.

In 2017, the United States Mint introduced the Palladium American Eagles. These first issues in 2017 came in Brilliant Uncirculated condition and had a mintage cap of just 15,000 coins. Interest in the new coins was so intense that the coins sold out. Subsequent issues in the collection included proof and reverse proof issues.

The obverse of the 2017 1 oz Palladium American Eagles bears the iconic Mercury Dime image. Created in 1916, the image of Liberty captures her bust in left-profile relief with a winged cap on her head. The design reminded Americans of the Roman messenger god, Mercury, so much so that the US dime it appeared on became known colloquially as the Mercury Dime. The Mercury Dime design was in circulation from 1916 to 1945 and debuted in the Palladium Eagles in 2017.

These 2017 1 oz Palladium American Eagles are perfect specimens. Coins with a Mint State 70 certification showcase full, original mint luster and come with no detracting flaws of any kind. The included First Strike designation means the coins were received within the original 30-day window following release by the United States Mint.