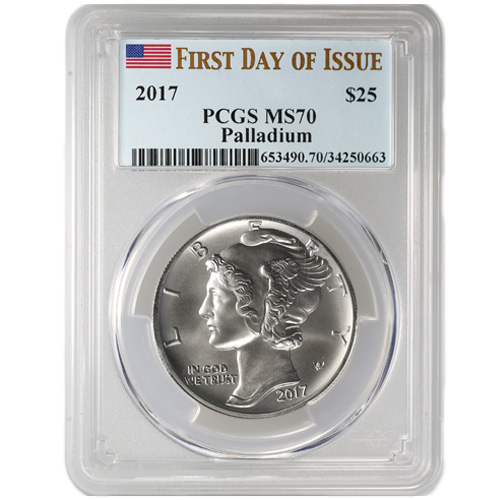 Palladium bullion coins are a relative rarity in the precious metals market. There are few examples of other major bullion coin programs that offer a palladium option, with the Royal Canadian Mint’s Palladium Canadian Maple Leaf coin serving as one rare example from a major sovereign mint.

With the introduction of the Palladium American Eagle, the United States Mint expands the American Eagle Series to serve investors interested in a variety of metals. The Silver Eagle and Gold Eagle have anchored the series since 1986, with the Platinum Eagle introduced in 1997.

All 2017 1 oz Palladium American Eagle Coins in this listing are perfect specimens according to the PCGS. Coins with a Mint State 70 grade have full, original mint luster and feature no detracting flaws of any kind. The First Day of Release designation and label is reserved for coins that arrive for certification within one business day of the release set by the US Mint.

On the obverse of the 2017 1 oz Palladium American Eagle you’ll find Weinman’s Mercury Dime design. Though it was officially known as Winged Liberty, after the Phrygian cap she wears in the left-profile portrait, many knew the design as the Mercury Dime because the image was reminiscent of the Roman messenger god Mercury, who wore a winged cap and winged shoes.

The reverse of the Palladium American Eagle includes a large, powerful bald eagle standing on a rock cliff. The bird is depicted with its wings arched back behind its frame, while its claws and beak grip tightly onto a branch.

Please don’t hesitate to contact Silver.com with questions about the new Palladium American Eagle. You can contact our customer service team on the phone at 888-989-7223, on the web using our live chat, and by sending us an email. You can find the price of gold and silver, along with other precious metals, on our website any time you want!