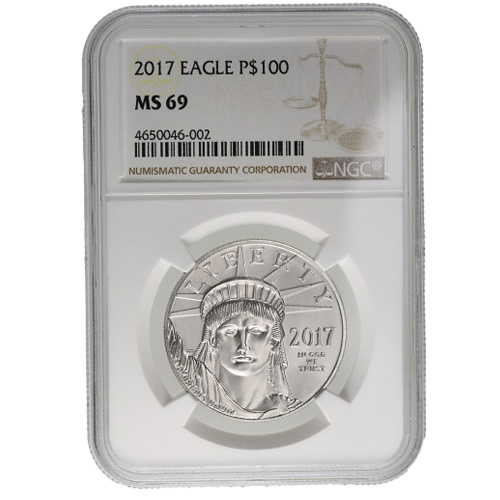 The official platinum bullion coin of the United States is the Platinum Eagle. Introduced in 1997, it became the third coin in the American Eagle Series and represented the first new metal option for precious metal investors from the series since the Silver Eagle and Gold Eagle debuted in 1986. Today, 2017 1 oz Platinum American Eagle Coins are available to you online at Silver.com.

While the Proof Platinum Eagle coins were sheared down to just the 1 oz coin in 2009 and continued in regular production every year, these bullion coins were cut down from four coins to the 1 oz coin only and not struck between 2009 and 2013, or in 2015 either. Mintage figures have varied wildly over the coin’s history from 133,002 in 1998 to just 6,000 coins in 2006.

All 2017 1 oz Platinum American Eagle Coins available to you here today are certified by the NGC as near-perfect specimens. Any coin with a Mint State 69 grade has full, original mint luster with an absolute maximum of two minor detracting flaws. These flaws are limited to minuscule hairlines or contact marks only.

The obverse of the Platinum American Eagle coin bears the “Liberty looking into the future” design. Created in 1997 by John Mercanti, it depicts only the head and a portion of the raised right arm of the Statue of Liberty gazing off into the distance. Engravings Include “Liberty,” the year of issue “2017,” and the national motto of “In God We Trust.”

Please feel free to reach out to Silver.com with questions or to learn the latest platinum price. You can call our customer service team at 888-989-7223, chat with us live online, or email us.