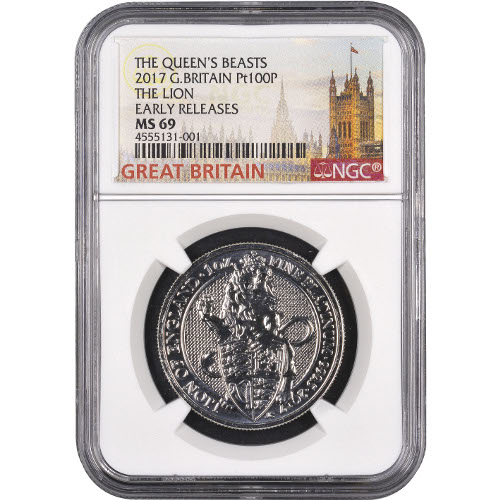 The Queen’s Beast collection of gold and silver coins from the Royal Mint has proven immensely popular among those buying precious metals. The designs in the series are new with each of the 10 scheduled releases, and now the first release of the series is available again on a stunning 1 oz platinum coin. Right now, the 2017 1 oz Platinum British Queen’s Beast Lion Coin is available in near-perfect condition for purchase online at Silver.com.

All of the 2017 1 oz Platinum British Queen’s Beast Lion Coins in this listing is in near-perfect condition according to the NGC. Coins with an MS69 grade exhibit full, original mint luster, but also include a maximum of two minor detracting flaws. These flaws are, namely, minuscule hairlines and contact marks found outside the primary focal areas.

An Early Release designation is applied to a coin that arrives for grading within a set timeframe. These coins must arrive at the NGC or an approved third-party depository, from the Royal Mint directly, within 30 days of the release date for the coins.

The first of the designs in the Queen’s Beast Collection is the heraldic Lion of England, the most important and visible of the creatures. The lion played a key role in British heraldry, often used in the coat of arms by many knights during the Early Medieval period. Today, the nation’s football team is often referred to as the Three Lions, a nod to the use of three lions on the country’s heraldic shield.

On the obverse of the Platinum British Queen’s Beast Lion Coin you’ll find Clark’s all-new portrait of Her Majesty Queen Elizabeth II. Captured in right-profile relief, Her Majesty’s portrait is surrounded by engravings of her name, the year of issue, and the face value of the coin in Pound Sterling.

The reverse of the 2017 1 oz Platinum British Queen’s Beast Lion Coin includes the fearsome image of the Lion of England. It is depicted standing behind the Royal Coat of Arms, with one paw holding the shield and the other raised, poised to strike back at the nation’s enemies.

If you have any questions, please feel free to ask. Silver.com associates are available at 888-989-7223, online using our live chat feature, and via our email address.