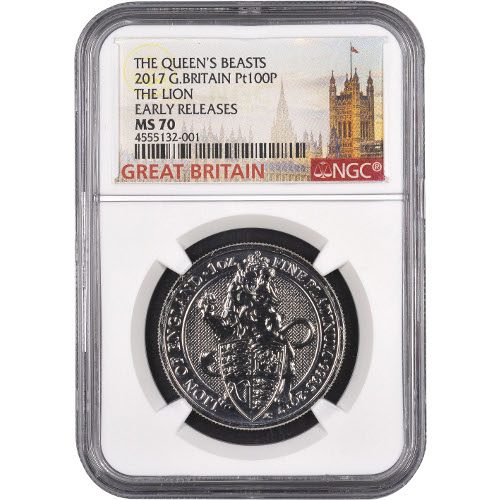 The Royal Mint is a global institution that once featured mints on numerous continents. Today, it is the official sovereign mint of the United Kingdom, and produces gold, silver, and platinum products available to investors and collectors. Among them you’ll find the all-new 2017 1 oz Platinum British Queen’s Beast Lion Coin, available to you today online at Silver.com with perfect NGC certification!

Expansion has come to the program in 2017 not only in the form of two subsequent design releases following the 2016 release of the Lion of England, but also a growth in the variety of products offered. The Lion of England design returns on an all-new 1 oz platinum coin and a 10 oz silver coin.

All 2017 1 oz Platinum British Queen’s Beast Lion Coins in this listing are perfect specimens according to the NGC. Coins with a Mint State 70 grade feature full, original mint luster and bear no detracting flaws anywhere on the surface areas of the coin.

Additionally, these specimens are Early Release coins. An Early Release designation is applied to a coin that arrives for grading within a set timeframe. These coins must arrive at the NGC or an approved third-party depository, from the Royal Mint directly, within 30 days of the release date for the coins.

On the obverse of the Platinum British Queen’s Beast Lion Coin you’ll find Clark’s all-new portrait of Her Majesty Queen Elizabeth II. Captured in right-profile relief, Her Majesty’s portrait is surrounded by engravings of her name, the year of issue, and the face value of the coin in Pound Sterling.

The reverse of the 2017 1 oz Platinum British Queen’s Beast Lion Coin includes the fearsome image of the Lion of England. It is depicted standing behind the Royal Coat of Arms, with one paw holding the shield and the other raised, poised to strike back at the nation’s enemies.

Please feel free to contact Silver.com at 888-989-7223 with your questions. We’re also available online via our live chat and email features, or you can visit our website to view gold, silver, and platinum prices today!