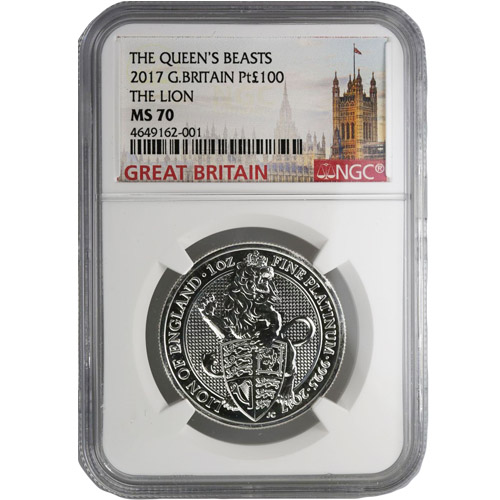 The platinum coin in the Queen’s Beast Series from the Royal Mint made its debut in 2017. The program as a whole was introduced in 2016 with a silver bullion coin and two gold bullion coins. After immense popularity to start, the Royal Mint expanded the collection to feature more metals and weights for investors. Today, 2017 1 oz Platinum British Queen’s Beast Lion Coins are available to you online at Silver.com.

When the Queen’s Beast Series was released, the Royal Mint opted for the Lion of England as the first design. It was featured on the mint’s first-ever 2 oz silver bullion coin, as well as a ¼ oz and 1 oz gold coin. In 2017, the debutant design was again used to unveil two more options in the series: a 10 oz silver coin and these new 1 oz platinum coins.

The Lion of England is the oldest design in the history of British heraldry. It was first recorded in 1127 when Matilda, daughter of King Henry I married Geoffrey Plantagenet. A gift of the lion on a blue shield was given to Plantagenet by Henry I.

All 2017 1 oz Platinum British Queen’s Beast Lion Coins in this listing are available in Mint State 70 condition. Considered a perfect specimen by the NGC, these coins have full, original mint luster with a complete lack of detracting flaws on the coin’s surface or design elements.

The obverse of all Platinum British Queen’s Beast Lion Coins features the right-profile portrait of Queen Elizabeth II. Her Majesty is captured on all British coinage in right-profile relief, with this portrait created in 2015 by Jody Clark as the fifth-generation effigy of the Queen during her reign as Queen of England.

On the reverse of the 2017 1 oz Platinum British Queen’s Beast Lion Coin is the famed Lion of England. The Norman kings of England have used various motifs of the lion since the rule of Henry II and his son, Richard I, also known as Richard the Lionheart.

Please don’t hesitate to reach out to Silver.com if you have questions. You can call our customer service team at 888-989-7223, chat with us live online, or simply send us an email with your inquiries.