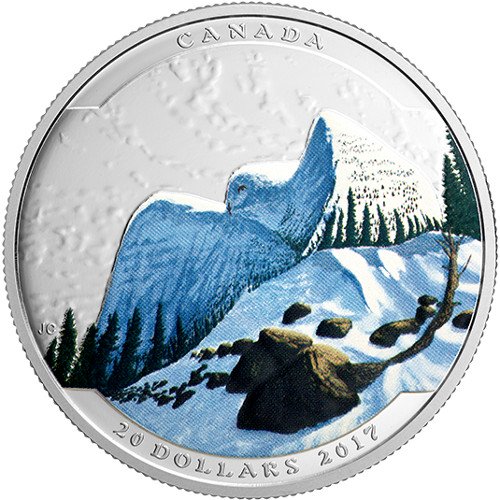 The snowy owl is one of the most majestic creatures found on the North American continent. Already a stealthy hunter by association with the owl species, the snowy owl has a brilliant white coat of feathers that helps it adapt to the harsh climates of the polar regions of Canada, all while blending in perfectly as it stalks prey. Today, the 2017 1 oz Proof Silver Canadian Landscape Illusion: Snowy Owl Coin is available to you online at Silver.com.

From the typical owl family species, the snowy owl is a native species to the Arctic regions of both North America and Eurasia. Males in the species are almost entirely white in their feathers, while females tend to have flecks of black in their plumage. Snowy owls were first cataloged by Linnaeus in his 1758 10th edition of Systema Naturae.

The coin design for this 2017 1 oz Proof Silver Canadian Landscape Illusion Snowy Owl coin appears to show, at first glance, the high, rugged cliffs on a massive mountain peak. Take a closer look at the mountain peak in question though, and you’ll notice something entirely different in the design.

On the reverse of the 2017 1 oz Proof Silver Canadian Landscape Illusion Snowy Owl coin is the colorized design of a snowy mountain landscape in the Canadian Rockies. Look closer at the mountain peak, with its breaks in the snow cover and treeline of pines, and you’ll notice the mountain peak doubles as a snow owl crouched with its wings spread wide.

The obverse of the Proof Silver Canadian Landscape Illusion Snowy Owl coin includes the effigy of Queen Elizabeth II. Her Majesty appears on the obverse of all Canadian coinage, numismatic and circulation alike, and this particular design is from Susanna Blunt in 2003.

Each of the Landscape Illusions silver coins from the Royal Canadian Mint combines the remarkable wildlife species of Canada into artwork that appears to also showcase the stunning vistas and beautiful views found throughout the country.

The Royal Canadian Mint is the official sovereign mint of the nation of Canada, producing both gold and silver bullion products for the nation. It consists of two minting facilities: the original location in Ottawa and a newer location in Winnipeg.

Please direct your questions to Silver.com at 888-989-7223. You can also connect with us online through our live chat and email address. Silver.com is also your home for the up-to-date price of silver per ounce!