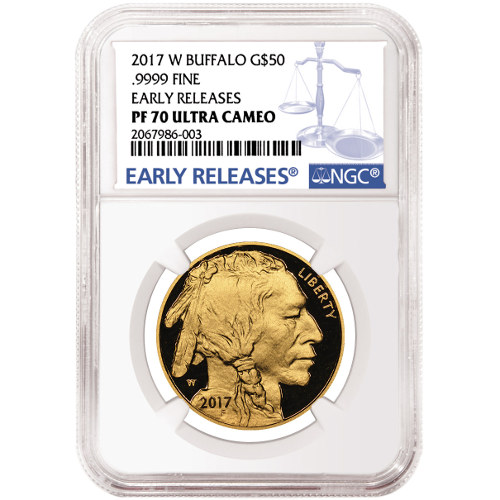 In the course of United States Mint history, there had never been a 24-karat gold coin released into circulation by the mint. From 1792 to 1837, the US Mint had used the crown gold standard for coin purity, which was effectively .925 gold. Starting in 1837 and continuing until 1986, all US Mint coins contained only .900 fine gold. The Gold American Buffalo’s release changed all that.

The reverse of the 2017 1 oz Proof Gold American Buffalo coin has the image of Black Diamond, a resident bison of the Central Park Zoo in New York City at the turn of the 20th century. Fraser’s inspiration for both the obverse and reverse design of the original Buffalo Nickel came from his childhood growing up in Minnesota and exploring the plains of the Upper Midwest with his father.

All 2017 1 oz Proof Gold American Buffalo Coins in this product listing are perfect specimens according to the certifiers of the NGC. Coins with a PF70 grade exhibit full, original mint luster and lack any and all detracting flaws on the surfaces of the coin.

To qualify for the NGC’s Early Release designation and label, coins must arrive for certification within a certain window of time. These 2017 Gold American Buffalo Proof coins had to arrive at the NGC or an approved third-party depository within the first 30 days of the release date set by the US Mint.

We encourage Silver.com customers to contact us with questions. Call us at 888-989-7223, chat with us live online, or simply send us an email. You can also find gold and silver prices today online at our homepage!