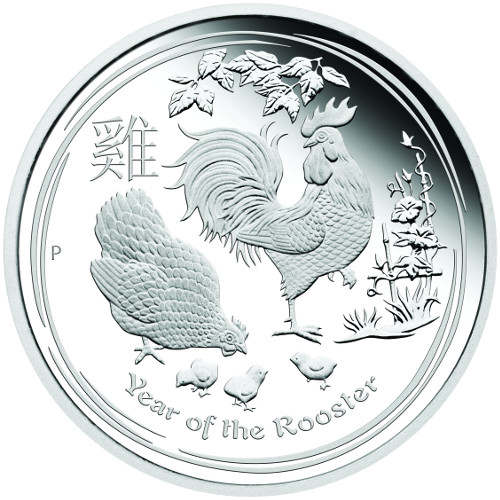 The Year of the Rooster has arrived on the Chinese Lunar Calendar, and the Perth Mint continues its celebration of Zodiac-themed coins with the release of its 2017 lineup of Lunar Series II coins. As with other recent years, you’ll find both silver and gold coins available as proof or bullion specimens. Today, the 2017 1 oz Proof Silver Australian Rooster Coin is available on Silver.com.

For the Year of the Rooster, the Perth Mint has unveiled two different designs honoring the rooster for its gold and silver coins. While the gold version focuses solely on the rooster, the Silver Australian Rooster coins feature the image of a family of chickens.

These 2017 1 oz Proof Silver Australian Rooster coins have a maximum individual mintage of 5,000 coins, with an additional 1,000 struck by the Perth Mint but reserved for use in its 3-coin proof Year of the Rooster set.

On the obverse of all Silver Australian Rooster Coins is the effigy of Queen Elizabeth II. Her Majesty’s portrait is surrounded by engravings that read “Elizabeth II,” “Australia,” “2017,” “1 Dollar,” and “1 oz 9999 Ag.”

The reverse of each 2017 1 oz Proof Silver Australian Rooster Coin features the aforementioned silver-exclusive Year of the Rooster design. Included is a rooster, hen, and three small chicks pecking for food on the ground. Engravings read “Year of the Rooster,” “P” for the Perth Mint, and the Chinese symbol for rooster.

All 2017 1 oz Proof Silver Australian Rooster coins ship inside of black and red display case, with black velvet lining. The box is shipped inside of a Year of the Rooster, Lunar Series II-themed shipper complete with an individually numbered Certificate of Authenticity.

The Perth Mint is a state-owned entity of Western Australia. Founded in 1899, it remained in British control as a former Royal Mint facility until 1970 when it was turned over to the state government. It is separate of the Royal Australian Min in Canberra, which serves as the official sovereign mint for the nation.

Please don’t hesitate to reach out to Silver.com. You can connect with our customer service team on the phone at 888-989-7223, online using our live web chat, and via our email address.