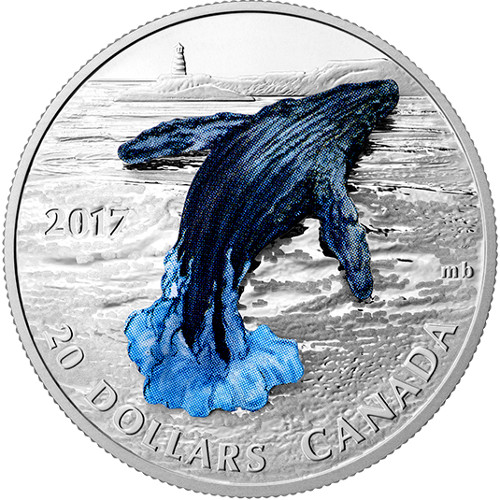 Some of the world’s largest creatures aren’t found roaming the continents, but swimming underneath the waters of the oceans. From time to time mankind is greeted with the stunning visuals of one of the world’s largest animals breaching surface of the water and splashing back down below. Right now, the 2017 1 oz Proof Silver Canadian 3D Breaching Whale Coin is available to purchase online at Silver.com.

A species of baleen whale, the humpback whale featured on the reverse of these Proof Canadian silver coins represents one of the largest animals in the world today. The average humpback whale will migrate as far as 16,000 miles each year between the cold polar waters for feeding and the warmer tropical waters to breed and give birth.

On the reverse face of the Breaching Whale Coin you’ll find the design of a humpback whale as it launches itself up out of the icy waters off the coast of Canada. The whale is shown arching its back as its leaps into the air, and the water where it breaches features a stunning icy blue colorization.

That isn’t what makes this coin special though. Viewed from the side you’ll see that the image of this humpback whale as it breaches the surface of the water literally comes up off the surface of the coin. The Royal Canadian Mint achieved this feat through a combination of unique printing and embossing to bring the unprecedented dimension to this coin.

On the obverse of the 2017 1 oz Proof Silver Canadian 3D Breaching Whale Coin is the image of Queen Elizabeth II. Captured in right-profile relief, this image was created in 2003 by Susanna Blunt for use on all Canadian coinage and began rolling out on coins in 2004.

With the release of the 2017 1 oz Proof Silver Canadian 3D Breaching Whale Coin, the Royal Canadian Mint has created a design that quite literally leaps off the reverse field of one of its coins, and it’s the first-ever use of a 3D design that breaches the surface of the coin’s design field.. Created by Matt Bowen, this depiction of a humpback whale combines the beauty of nature, colorization, and 3D finish to one product.

If you have any questions about this silver coin, please contact Silver.com at 888-989-7223. You can also connect with us online using our live chat and email features, and keep up to date on silver prices through our website.