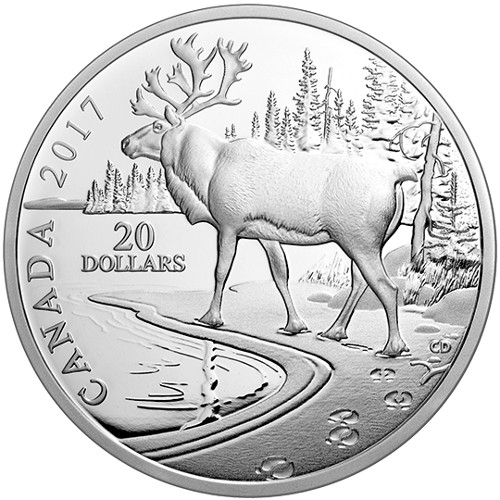 The nation of Canada is home to some of the most beautiful natural landscapes in the world, and countless animal species call those mountains, valleys, plains, and woodlands home. Among them is the woodland caribou, which is featured in a new 2017 proof silver coin from the Royal Canadian Mint. Right now, the 2017 1 oz Proof Silver Canadian Nature’s Impression: Woodland Caribou Coin is available to purchase online at Silver.com.

Caribou of this particular subspecies were designated as a threatened species in 2002 by the Committee on the Status of Endangered Wildlife in Canada. Historically, the woodland caribou had a range that stretched from Alaska to Newfoundland, and south in the modern US states of Washington, Minnesota, Wisconsin, Michigan, Idaho, and the states of the New England region.

The edge of these 2017 1 oz Proof Silver Canadian Natures Impressions Woodland Caribou coins feature the first-ever use of edge striking by the Royal Canadian Mint. Rather than a traditional serrated edge, these coins have a flat, plain edge that includes caribou tracks running round the outside.

On the coin’s reverse you’ll find the enhanced image of a woodland caribou as its walks along snow-covered ground just at the edge of one of Canada’s massive boreal forests. In the snow you’ll notice the unique tracks of the Caribou. This 2017 1 oz Proof Silver Canadian Natures Impressions Woodland Caribou Coin features a design by Claudio D’Angelo.

On the obverse of each Woodland Caribou coin you’ll find the right-profile portrait of Queen Elizabeth II. Created in 2003 by Susanna Blunt, these design has been in use on Canadian coinage since 2004.

If you have any questions, please don’t hesitate to ask. Silver.com customer service associates are available on the phone at 888-989-7223, online using our live chat, and via our email address.