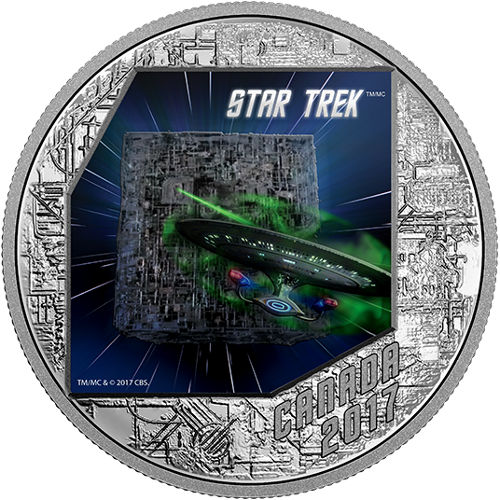 Whether in movie theaters or on the small screens of millions of TV viewers around the world, Star Trek enjoys popularity that transcends generations. From its Original Series debut in 1966 to modern remakes of the first Star Trek films, the sci-fi franchise remains popular today. The Royal Canadian Mint has a variety of proof colorized silver coins based on the franchise, including images of The Borg. Today, 2017 1 oz Proof Silver Canadian Star Trek The Borg Coins are available to you online at Silver.com.

The Borg makes its first appearance on a silver coin in this Star Trek release. The Borg appeared during a 1989 episode of Star Trek: The Next Generation entitled “Q. Who?” The Next Generation series was the first follow-up to the Original Series and was on TV from 1987 to 1994, making it the longest-running Star Trek television series.

All of the 2017 1 oz Proof Silver Canadian Star Trek The Borg Coins in this listing are part of the Royal Canadian Mint’s 30th-anniversary celebration of Star Trek: The Next Generation. The coins are individually encapsulated and ship to you inside of a Star Trek-themed presentation box. The coins all come with a Certificate of Authenticity bearing a unique serial number.

On the reverse side of 2017 Proof Silver Star Trek The Borg Coins is an impressive colorized image of The Borg. The massive cube-shaped beast emits its bright-green tractor beam at the USS Enterprise as it attempts to make a getaway. The Borg was a formidable force and was considered one of the greatest threats to the Federation.

The obverse face of 20170 1 oz Proof Silver Star Trek The Borg Coins bears the effigy of Queen Elizabeth II. Here, Her Majesty is captured in right-profile relief in a design created in 2003 by Susanna Blunt. This is the fourth-generation portrait of the Queen on Canadian coins during her reign and is just the second monarch portrait ever created by a Canadian artist for national currency.

Please feel free to reach out to Silver.com if you have questions when buying silver. You can call us on the phone at 888-989-7223, chat with us live online, or simply send us an email with your inquiries.