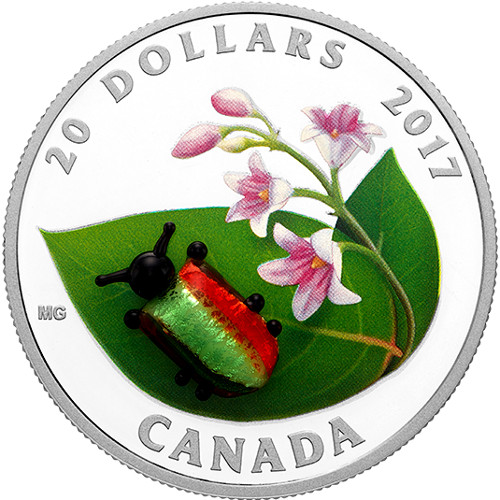 The Royal Canadian Mint is well-known for producing beautiful colorized silver coins. Many of its proof silver coins of this type have low mintage figures and the individual designs are only issued one time. Right now, 2017 1 oz Proof Silver Canadian Venetian Glass Dogbane Beetle Coins are available to purchase online at Silver.com.

Each of the 2017 1 oz Proof Silver Canadian Venetian Glass Dogbane Beetle coins available here at Silver.com comes with beautiful presentation packaging. The coins are housed inside of the Royal Canadian Mint’s maroon clamshell with a black beauty box. The low-mintage coins also come with a numbered Certificate of Authenticity.

These Little Creature Series releases are particularly impressive for the inclusion of Venetian glass in the reverse design element. The 3D body of the dogbane beetle is completed with Venetian glass and was crafted by master glassmaker Guiliano Donaggio in Murano, Italy.

On the reverse side of the 2017 Proof Silver Canadian Venetian Glass Dogbane Beetle Coins is the 3D image of the beetle. Its body sits atop the surface of the silver coins and delivers brilliant visuals courtesy of the Venetian glass finish. The image of the beetle itself was crafted by Canadian artist Maurice Gervais.

The obverse face of 2017 1 oz Proof Silver Canadian Venetian Glass Dogbane Beetle Coins features Queen Elizabeth II. In this right-profile portrait, Her Majesty is depicted without a crown in the first such monarch portrait on Canadian coinage since the reign of her father, King George VI. This effigy was created in 2003 by Susanna Blunt as the fourth-generation portrait during her reign.

Founded in 1908, the Royal Canadian Mint is the sovereign mint of Canada. It was originally formed to refine gold and silver discovered in the Yukon Territories during the late 19th century. Today, the mint consists of facilities in Ottawa and Winnipeg, with the former producing all the nation’s bullion coinage and the latter producing all of its circulation coins.