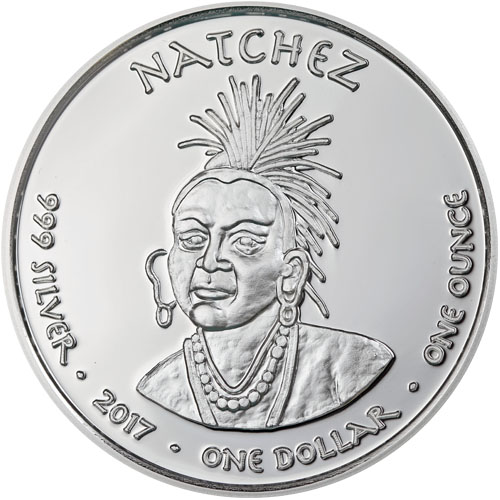 The American black bear, better known as Ursus americanus, is a medium-sized bear that is native to the North American continent and found from the northern stretches of Canada to small patches of land throughout the American South. The black bear is the focus of the latest Silver Proof Native American Coin in the impressive series. The 2017 1 oz Silver Proof Louisiana Natchez Black Bear Coin is now available to you online at Silver.com.

Black bears are found predominantly in wide stretches of Alaska and the territories and provinces of Canada. The most significant populations in the United States stretch from the Pacific Northwest down the coast, through the Rocky Mountain states, and along the Appalachian Mountain range in the east.

In the state of Louisiana, black bears are found in two small patches along the border with Arkansas and Missouri in the northeast and deep in the south in the Atchafalaya basin. The Natchez people represented in this release are descended from the Mississippian culture of prehistoric North America.

The Native Dollars Series from the Native American Mint is designed to represent the different states of the United States with a particular tribe known to have lived or currently reside within its boundaries. Additionally, the reverse design of each highlights an animal either native to the local environment or important to the survival and culture of the tribe.

On the obverse of the 2017 1 oz Proof Louisiana Natchez Black Bear Silver Coin you’ll find the image of a tribal member from the Natchez. During the course of American history, Natchez communities were found largely in Louisiana and Mississippi, before being resettled in Oklahoma, where most modern descendants are now found.

The reverse of the Louisiana Natchez Black Bear Silver Coin includes a design honoring the American black bear. This species of bear is native to North America and is the smallest and most widely distributed species. Black bears in Louisiana are found predominantly in the south-central region of the state.

We encourage all Silver.com customers to call us at 888-989-7223 with questions. You can also connect with us online using our live chat or by sending us an email. Don’t forget you can browse all of our silver for sale through our online catalog.