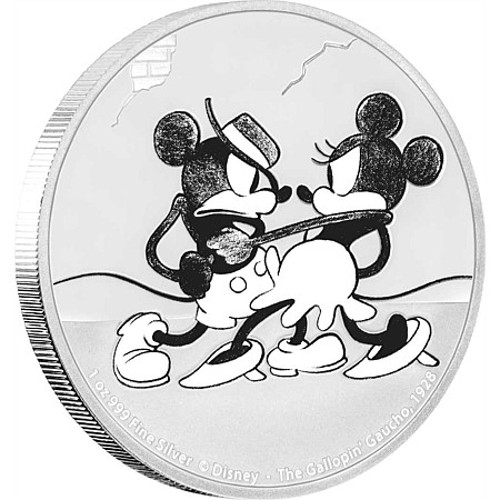 The New Zealand Mint is ready with the first release of 2017 in the Mickey Through the Ages collection, and it takes you back 90 years to the second-ever film featuring the lovable mouse who has become a global icon in the last century. Right now, the 2017 1 oz Silver Niue Mickey Mouse Gallopin’ Gaucho Series Proof Coin is available to purchase online at Silver.com.

Each 2017 1 oz Gallopin’ Gaucho Silver Proof coin ships from the New Zealand Mint inside one of its beautiful display boxes, which itself is housed within a colorful shipper that bears artwork from The Gallopin’ Gaucho. Included with your purchase is a Certificate of Authenticity.

Co-directed by Ub Iwerks and Walt Disney, The Gallopin’ Gaucho was a playful parody of the Douglas Fairbanks film The Gaucho, which was released to theaters in November of 1927. The film takes place in the Pampas of Argentina, and the storyline of Disney’s The Gallopin’ Gaucho carefully follows that of Fairbanks’ film, with Mickey in the title role.

On the reverse of the 2017 1 oz Silver Niue Mickey Mouse Gallopin’ Gaucho coin is the image of Mickey Mouse in the title role as a gaucho. The term is used for cowboys in South America, and in Mickey’s role he mimics the feature film of 1927 The Gaucho, which was created by Douglas Fairbanks.

The obverse of all 2017 1 oz Silver Niue Mickey Mouse Gallopin’ Gaucho Series Proof Coins includes Queen Elizabeth II’s effigy. Her Majesty appears on the obverse of all New Zealand and commonwealth coins, with this design from Ian Rank-Broadley created in 1998 as the fourth-generation effigy since 1952.

Located in Auckland, the New Zealand Mint is the only operational mint facility in the country. However, it is not the sovereign mint of the nation, but instead operates as a private company. All New Zealand currency is struck by the Royal Canadian Mint and Royal Mint instead.

If you have any questions, please don’t hesitate to ask. Silver.com customer service is available at 888-989-7223, online using our live web chat, and via our email address.