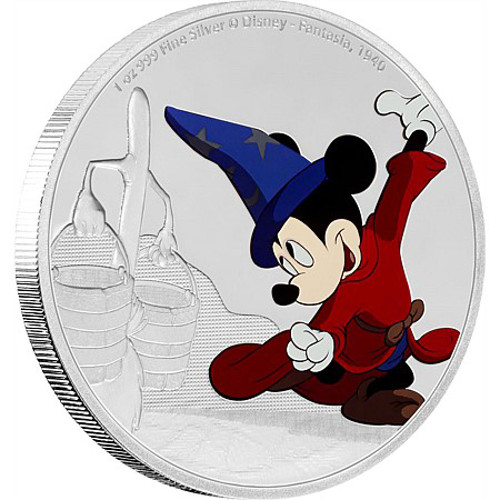 Mickey Mouse is Walt Disney’s most popular animated character. One of the most recognizable Mickey Mouse films is Fantasia, which was released in November of 1940. New Zealand Mint is not only honoring the movie, but also the mouse behind it all with the Mickey Through the Ages Series. The latest release in the series is the 2017 1 oz Silver Niue Mickey Mouse Fantasia Series Proof Coin, which is now available on Silver.com.

Fantasia got a rough start when it hit theaters in 1940. The movie was released in 13 different cities in the United States in leased theaters. These theaters were leased out so the company could install special Fantasound systems that were necessary to provide the correct audio for the film. These expensive necessities made it difficult for the film to make money. Numerous rereleases have increased the success of the film, however.

The Mickey Through the Ages Series from the New Zealand Mint includes a number of different designs to honor different Disney movies featuring Mickey Mouse. Each release in the collection comes in both silver and gold. The silver option is only the 1 oz colorized version; the gold coins are available in 1 oz, 1/4 oz and 1/2 gram weights.

On the obverse of each 2017 1 oz Silver Niue Mickey Mouse Fantasia Series Proof Coin, you will see the fourth-generation version of Queen Elizabeth II’s right-profile image. This image was created by Ian Rank-Broadly in 1998. The Queen has been featured on all commonwealth coinage since 1952 when she took the throne.

The reverse of each of these coins shows the colorized version of Mickey as the Sorcerer’s Apprentice in the movie Fantasia. The artwork shows Mickey commanding a mop that is carrying buckets of water. Mickey wears the iconic magic hat.

All of the coins in this listing ship in a wooden display box inside of a Fantasia-themed shipper that also displays artwork from the movie.

The New Zealand Mint, located in Auckland, is a private mint that produces coinage for a number of small nations in the South Pacific. While the mint creates sovereign bullion for other nations, it is not responsible for minting New Zealand’s currency or bullion coins.

If you have questions, please don’t hesitate to reach out to Silver.com. Our associates are available on the phone at 888-989-7223, online using our live chat, and via our email address.