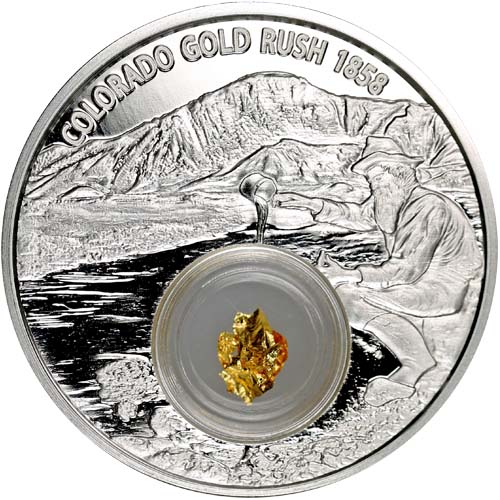 Originally referred to as the Pike’s Peak Gold Rush, the Colorado Gold Rush of 1858 was the second major discovery of gold in the United States to occur within a decade. This followed the California Gold Rush of 1849, and furthered the expansion of American settlers and immigration to the Western territories and burgeoning states. Today, 2017 1 oz Proof Silver Niue Gold Rushes of the World Colorado Silver Coins are yours to buy online at Silver.com.

“Pike’s Peak or Bust” was the motto of gold miners and dreamers across the United States when news leaked out that gold had been discovered in Colorado. The Colorado Gold Rush of 1858 was actually born out of the California Gold Rush, as it was 49ers headed to California during the gold rush of 1849 who first panned gold from the South Platte River.

This gold didn’t delay miners headed further west, but when the California gold fields were exhausted, miners explored the region near Pike’s Peak in the Rocky Mountains of Colorado on the way back east and discovered enough gold worth sparking a rush. The 2017 1 oz Proof Silver Niue Gold Rushes of the World Colorado Coin commemorates the gold rush there in 1858, which eventually produced 150,000 ounces of gold in 1861 and 225,000 ounces in 1862.

On the reverse of all 2017 1 oz Proof Silver Niue Gold Rushes of the World Colorado Coins you’ll find the image of a hopeful gold miner desperately searching for gold along the South Platte River at the base of Pike’s Peak. Included within the design of these coins is a transparent capsule with a leaf of 24-karat gold, which is visible on both the reverse and obverse faces.

The obverse of the Gold Rushes of the World Colorado Coin you’ll find a right-profile portrait of Queen Elizabeth II. Her Majesty is featured on the obverse of all British and commonwealth coinage, and this fourth-generation depiction of the Queen was in wide use from its introduction in 1998 by Ian Rank-Broadley.

Please feel free to reach out to Silver.com when you have questions. Our customer service team is available at 888-989-7223, online using our live web chat, or via our email address. You can always find the current price of silver on our homepage when shopping!