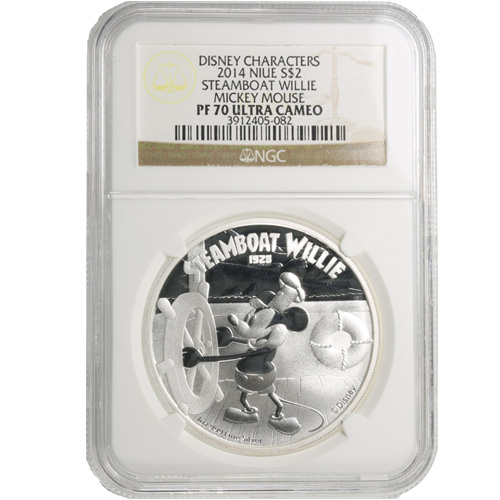 There is little question that Mickey Mouse is one of the best-known and most-beloved animated characters in the world. Introduced to the world in 1928, Mickey Mouse and his girlfriend Minnie have delighted generations of young children and form the backbone of a multi-billion dollar franchise for the Walt Disney Company. Right now, 2017 1 oz Proof Silver Niue Mickey Mouse Steamboat Willie Coins are available to purchase online at Silver.com with NGC certification.

Each 2017 1 oz Proof Silver Niue Mickey Mouse Steamboat Willie Coin in this listing is available to you in perfect condition. The NGC assigns a PF70 certification to coins that exhibit full, original mint luster with no detracting flaws of any kind on the surface areas or design elements of the silver coin.

The reverse field of the 2017 1 oz Proof Silver Niue Mickey Mouse Steamboat Willie Coin includes an image of Mickey Mouse from the film. Though Mickey and Minnie had previously appeared in Plane Crazy earlier in 1928, that film and another didn’t gain the distribution of Steamboat Willie.

On the obverse face of the 2017 Proof Silver Niue Mickey Mouse Steamboat Willie Coin is Queen Elizabeth II. This right-profile portrait was created in 1998 by Ian Rank-Broadley for the Royal Mint of England. It featured on British coins until 2015, Australian coins until 2018, and is still in use on New Zealand currency, as well as the coinage of Niue and Tuvalu.

The New Zealand Mint has more than four decades of experience producing silver and gold bullion in the South Pacific. Known as the mint of the South Pacific colloquially, the private minting operation in Auckland produces bullion coinage for the likes of Fiji, Niue, and Tuvalu. Proof coins such as these have the NZ Mint logo, which depicts the four stars from the New Zealand flag known as the Southern Cross constellation.