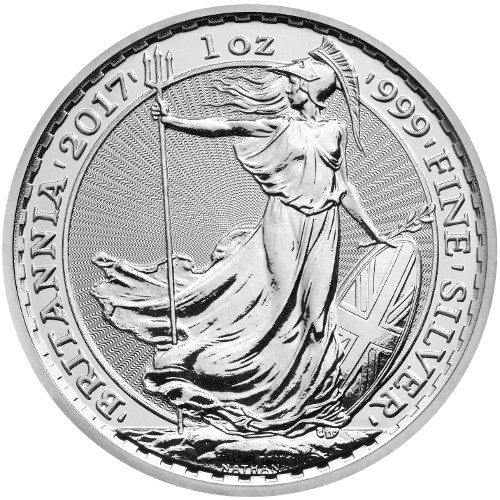 Any quantity available for $11.49 per oz over spot!

The Silver Britannia is the silver bullion version of the United Kingdom’s official bullion coin offering. The term Britannia originated more than 2,000 years ago when the Roman Empire expanded off of the European continent with its eyes set on the British Isles. Today, Britannia is the primary image on the Britannia coin series. Right now, 2017 1 oz Rooster Privy Silver British Britannia Coin is available to purchase online at Silver.com.

Each 2017 1 oz Rooster Privy Silver British Britannia Coin available here today at Silver.com is in BU condition. Coins in BU condition exhibit no signs of wear and tear, but do have the potential for minor flaws stemming from the coining process. These minor flaws include possible breaks in the luster, spotted surfaces, and contact marks.

The Lunar Privy Silver Britannia coins debuted in 2013, and now enter a fifth year of issue with the 2017 Year of the Rooster release. The privy marks on these coins are unique in that you won’t find them on the obverse or reverse surfaces of the coin. Instead, the Royal Mint engraved these stunning privy marks on the outer edge rim of the coins. There are a series of rooster privy marks to note the Year of the Rooster on each Silver British Britannia listed here today.

On the reverse of the 2017 Silver British Britannia Coin is the Britannia design created in 1987 by Philip Nathan for use on the gold bullion coin in the series. Britannia is known as the protector of the British Isles, wielding a trident in her right hand to control the waters of the English Channel and holding a shield emblazoned with the Union Jack in her left hand.

The obverse of all 2017 1 oz Rooster Privy Silver British Britannias includes a right-profile portrait of Queen Elizabeth II. The ruling monarch of England since 1952, this is the fifth-generation portrait of Her Majesty to appear on British coinage. Created in 2015 by Jody Clark, the design made Clark the youngest Royal Mint Engraver to design to Queen’s portrait at the age of 33.

If you have any questions, please feel free to reach out to Silver.com. Our customer service associates are available at 888-989-7223, online through our live chat, and via our email address. Silver spot prices are regularly updated on our site throughout the day!