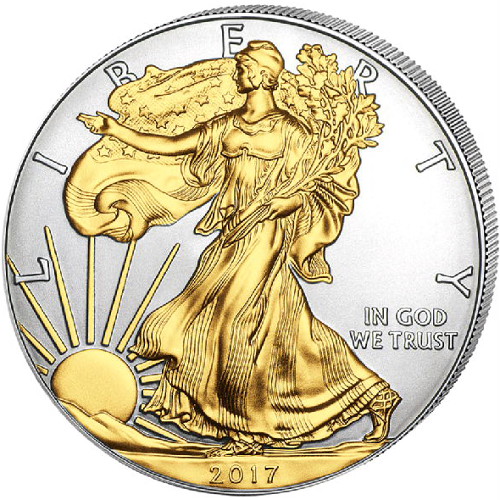 For the Silver American Eagle, the US Mint selected Adolph A. Weinman’s 1916 design of Walking Liberty. Representative of the nation’s drive toward a brighter future, it includes the image of Liberty walking toward the setting sun. The heraldic eagle of the United States has appeared on coinage since 1794, and was modernized for the Silver Eagle.

Each 2017 Silver American Eagle coin available here has a stunning 24-karat gold layering applied to the Walking Liberty image. Appearing only on the coin’s obverse design, this gilded application adds collectible value and visual brilliance to the coins.

The obverse of the Silver American Eagle coin includes the image of Walking Liberty. Weinman’s design appeared on the nation’s 50-cent piece from 1916 to 1947, and more recently appeared on a stunning 2016 Gold Walking Liberty Half-Dollar centennial coin to mark its 100th anniversary.

On the reverse of the 2017 Silver American Eagle coin you’ll find the image of the heraldic eagle of the United States. Created and used in various iterations since 1794, this depiction is a modernized visual from John Mercanti. His vision took shape in 1986, his first year on the job as Chief Engraver of the United States Mint.

All 2017 Silver American Eagle coins available here are in BU condition. Coins in this condition show no signs of wear and tear, though you may notice minor flaws ranging from breaks in the luster and spotted surfaces to contact marks as a result of striking the blanks during production at the mint.

The United States Mint does not apply colorization or gilded finishes to its coins. These limited-issue Silver Eagles were gilded by Emporium Hamburg, a third-party dealer in Germany.

We encourage all Silver.com shoppers to contact us on the phone at 888-989-7223, chat with us live online, or submit questions via email.