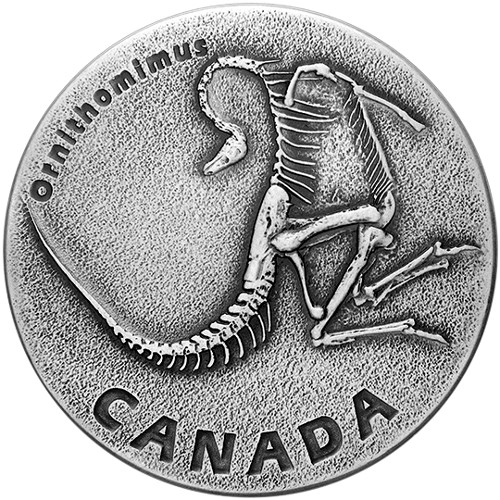 The modern nation of Canada may be young, but the life forms and terra firma of the Canadian wilderness date back thousands of years in existence. The Royal Canadian Mint teamed with the Royal Tyrell Museum to issue popular Ancient Canada coins, with the Ornithomimus featuring prominently on the reverse of this issue. Today, 2017 1 oz Silver Antique Canadian Ancient Canada Ornithomimus Coins are available to you online at Silver.com.

The ornithomimus lived during the Late Cretaceous Period on the North American continent and was a swift, bipedal dinosaur. Fossil evidence discovered over the years indicates the ornithomimus was covered in feathers and featured a small, toothless beak. Early members of the species had wings just for display and not for flight.

All 2017 1 oz Silver Antique Canadian Ancient Canada Ornithomimus Coins are available with truly unique packaging. The coins are housed in floating frames with no capsule which allows for a better viewing experience. The case comes with its own pedestal and everything is housed in a presentation box for shipping. The coins each come with an individually serialized Certificate of Authenticity.

On the reverse side of 2017 Silver Antique Canadian Ancient Canada Ornithomimus Coin is the image of the fossilized remains of the ornithomimus. Engravings on this side include the name of the dinosaur species and the nation of issue. These coins have an antique finish and rimless blank giving a finished product appearance similar to ancient Roman coins.

The obverse face of 2017 1 oz Silver Antique Canadian Ancient Canada Ornithomimus Coins bears the effigy of Queen Elizabeth II. Her Majesty is depicted in right-profile relief in a 2003 design by Susanna Blunt. This is the fourth effigy of the Queen to feature on Canadian coins during her reign and is the first since the reign of her father, King George VI, to depict the monarch without a crown.

The Royal Canadian Mint was founded in Ottawa in 1908 to provide independent refining capacity to the nation as gold and silver flooded in from the Yukon Territories. Today, it is the sovereign mint of the nation and operates mints in Ottawa and Winnipeg.

Please feel free to reach out to Silver.com when you buy silver. You can call us at 888-989-7223, chat with us live online, or email us directly.