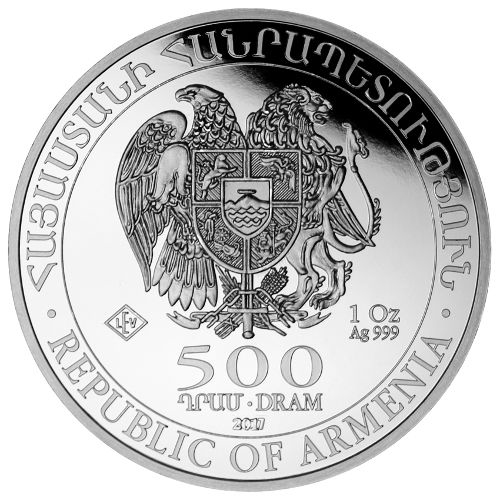 The youngest silver bullion program in Europe is the Silver Armenian Noah’s Ark Coins. These coins are minted by Geiger Edelmetalle in Germany for Armenia. Each year, these silver coins are minted in a variety of sizes with face values in Drams. This issue marks only the 7th year these coins have been produced. Get your 2017 1 oz Silver Armenian Noah’s Ark Coins today at Silver.com.

The Silver Armenian Noah’s Ark Coins were introduced in 2011 as a 1 oz silver bullion coin. That same year, 1/2 and 1/4 oz coins were also released as fractional weight options. In 2012, the series further expanded with larger weight coins. The 1 oz has continued to be the most popular coin in the program, however.

These coins are based on the story of Noah’s Ark in the Bible. In the Book of Genesis, Noah fills the ark full of animals and they float on flood waters for 40 days. At the end of 40 days, the ark washes up on Mount Ararat after a dove returned to the ship with an olive branch.

The obverse of each 2017 1 oz Silver Armenian Noah’s Ark Coin features the image of the Armenian Coat of Arms. In the center of the shield, you will see a depiction of the tale of Noah’s Ark with a boat on top of Mount Ararat with water below. To the left, you will see an eagle. On the right, there is a lion.

On the reverse of each coin, you will see the ark and the flood described in the Book of Genesis in the Christian Bible. You can see the dove with an olive branch flying over the boat that is supposedly filled with various animals.

All of the coins in this listing are in Brilliant Uncirculated, or BU, condition. This means that while the coins have no signs of wear and tear, they may have minor flaws. These flaws include breaks in luster, spots on the surface and contact marks from the coining process.

Every Silver Armenian Noah’s Ark Coin is minted by Geiger Edelmetalle, a minting facility in Germany. Geiger produces a wide array of both gold and silver precious metals products.

If you have any questions about these brilliant coins, don’t hesitate to ask a Silver.com associate. You can reach us on the phone at 888-989-7223, connect with us online using our live chat, or send us an email.