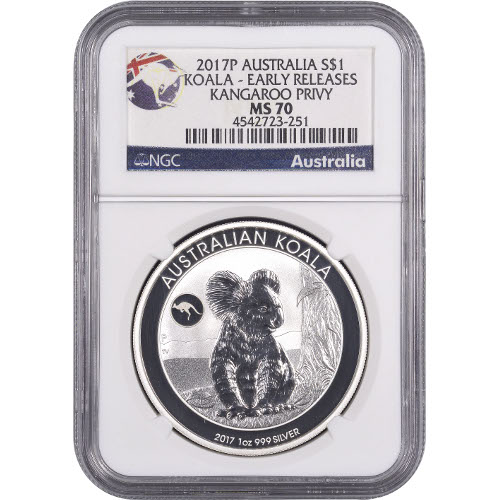 The Kangaroo and Koala are two of Australia’s most indelible images around the world. These marsupial species are unique to the Australian continent, and form the backbone of the Perth Mint’s famous annual-release silver and gold coin programs. Now these creatures are available together on the 10th anniversary of the Silver Australian Koala. Right now, the 2017 1 oz Kangaroo Privy Silver Australian Koala Coin is yours to purchase online at Silver.com.

All of the 2017 1 oz Kangaroo Privy Silver Australian Koala coins available here have been certified perfect specimens by the NGC. Coins with a Mint State 70 grade feature full, original mint luster and lack any type of detracting flaws on the surface areas. The Early Release designation denoted by the “ER” on the label indicates the coins were received by the NGC for certification within 30 days of the Perth Mint’s release for distribution.

Silver Koala Coins are one of the younger annual-release specimens from the Perth Mint, but no less popular than some of its contemporaries. The Gold Kangaroo is the oldest, debuting in 1986, followed by the Silver Kookaburra in 1990. The Silver Koalas debuted in 2007, and follow Perth Mint design protocol with new reverse imagery each year.

On the obverse of all 2017 Silver Australian Koala Coins you’ll find the effigy of Queen Elizabeth II. Created in 1998 by Ian Rank-Broadley, this is the popular fourth-generation image of Her Majesty still in use on Australian coinage.

The reverse of the 2017 1 oz Kangaroo Privy Silver Australian Koala Coin features the latest koala design, which captures the image of a lone koala as it sits on the ground of the Australian Outback. Included on the reverse is the popular hopping kangaroo design which now serves as the primary image of the Silver Australian Kangaroo bullion coin, but here is featured as a small privy mark in the upper left.

If you have any questions about these silver coins for sale, please contact Silver.com. Our customer service team is available at 888-989-7223, online using our live chat, and via our email address.