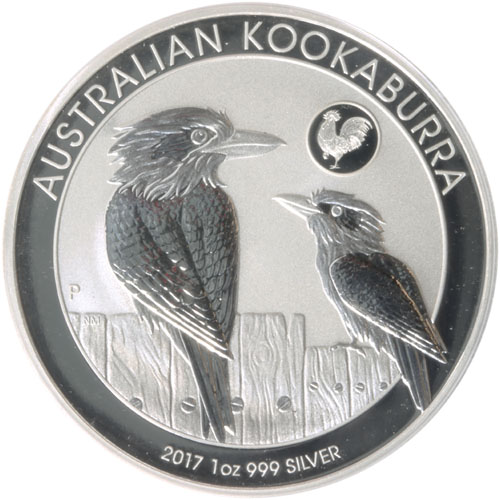 The Silver Australian Kookaburra is one of the Perth Mint’s most prominent coin programs. Introduced in 1990, it is the longest-running silver bullion coin from the mint and boasts new designs on the reverse every year. The Lunar Series II program was the popular follow-up to the Lunar Series I program and was available from 2008 to 2019. Now, the two have come together with a Year of the Rooster Privy on the Silver Kookaburra. The 2017 1 oz Silver Australian Kookaburra Rooster Privy Coin is now available to you for purchase online at Silver.com.

Since 2012, the annual Silver Kookaburra coins have been released with a variety of privy mark options, but the most consistent of those privy marks have been the animals of the Lunar Series II release. The very first release had a mintage cap of 80,000 coins, but from 2013-2017 the coins had a cap of 50,000 and these 2017 Silver Kookaburra Rooster Privy Coins were the last to sell out completely.

On the obverse of 2017 1 oz Silver Australian Kookaburra Rooster Privy Coins is the image of Queen Elizabeth II. This is the fifth portrait of the Queen to feature on Australian coins and was designed for the Royal Mint of England in 1998 by Ian Rank-Broadley.

The reverse face of 2017 Silver Australian Kookaburra Rooster Privy Coins features the image of two kookaburras, one adult and one youth, sitting on the top of a wooden fence. The boards of the fence are uneven, but the details of the design are so intricate you can notice the grain of the wood and the flathead screws used to affix the boards to the posts. Above the smaller bird is the Year of the Rooster privy with a large rooster in left-profile relief.

We encourage Silver.com customers to call us with questions about silver for sale at 888-989-7223. You can also connect to us online through our live chat and email address features.