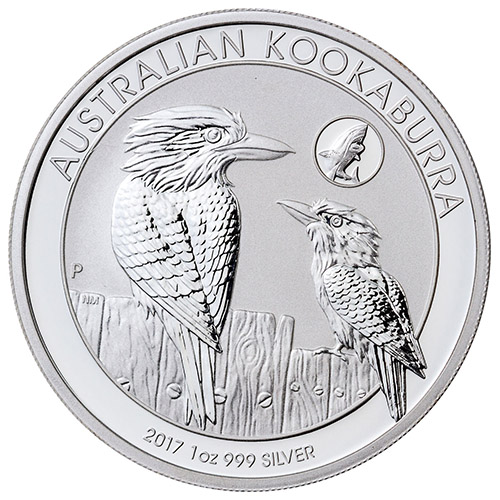 Among the silver coins for sale from the Perth Mint each year, the Silver Kookaburra can be considered the mint’s flagship coin program. Introduced in 1990, the Silver Kookaburra set the precedent for Australian native species as primary design elements, as well as the use of rotating reverse design features each year. The 2017 1 oz Silver Australian Kookaburra Shark Privy Coin is currently available to you for purchase online at Silver.com.

The Australian continent has a total of some 16,006 miles of coastline touching both the Indian and Pacific Oceans. With so much water at its shores and an active population, encounters between sharks and humans are inevitable in Australia. The nation is famous for surfing as the waters of both oceans create great waves along the coastlines, but this puts people at greater risk of contact with sharks.

While creatures like the Kookaburra, Koala, and Kangaroo are easily associated with Australia and featured by the Perth Mint on coinage, the shark is notably absent. The inclusion of a Shark Privy on these 2017 1 oz Silver Australian Kookaburra coins is a nod to the deadly creatures prowling the coastline of Australia. In fact, Australia is home to the three deadliest shark species: Great White, Tiger, and Bull sharks.

On the reverse of the 2017 1 oz Silver Australian Kookaburra Shark Privy Coin you’ll find two unique images. First and foremost is the one-time 2017 Kookaburra design, which depicts a mature kookaburra sitting perched on a wooden fence board next to a young kookaburra. Additionally, there is the privy mark of the fearsome Great White shark included on this side.

The obverse of the Silver Australian Kookaburra Shark Privy Coin bears the familiar right-profile portrait of Queen Elizabeth II. This effigy of England’s longest reigning monarch comes from Ian Rank-Broadley, who designed the portrait in 1998 as the fourth-generation effigy of the Queen for British and commonwealth coins.

Your 2017 1 oz Silver Australian Kookaburra Shark Privy Coin is available here today in BU condition. Coins in BU, or brilliant uncirculated, condition have no indications of wear and tear. However, it is possible for the striking of blanks to result in minor flaws ranging from breaks in the luster and spotted surfaces to contact marks.

We encourage Silver.com customers to reach out to us with questions when buying silver. Feel free to call us at 888-989-7223, chat with us live online, or simply email us with your inquiries.