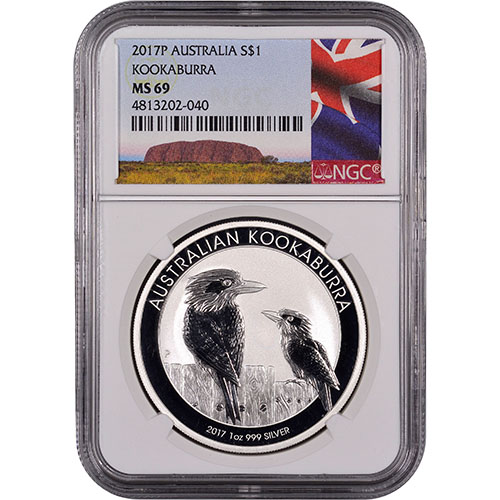 Australia’s most famous silver coin program is the Silver Kookaburra. Introduced in 1990, these coins have featured a new design of the kingfisher species of terrestrial birds. The Kookaburra is a staple of the Outback, and its sounds are often used as stock sound effects in media focusing on the Australian bush. Right now, 2017 1 oz Silver Australian Kookaburra Coins are available to purchase online at Silver.com.

Each 2017 Silver Australian Kookaburra coin listed for sale here today is a near-perfect specimen. Any coin that earns the Mint State 69 certification from the NGC exhibits full, original mint luster with a maximum of two minor detracting flaws. These detracting flaws are limited to minuscule contact marks or hairlines.

On the reverse of the 2017 1 oz Silver Australian Kookaburra Coin is the design of two kookaburras sitting on a wooden fence. To the left is a larger adult, while a younger chick is featured on the right. The details of the coin’s design are intricate, showcasing the flathead screws used to affix the boards to the fence and even displaying the grain of the wood.

The obverse of the 2017 Silver Kookaburra coin features the fourth-generation effigy of Queen Elizabeth II. In this depiction, Her Majesty is shown in right-profile relief. This was designed in 1998 by Ian Rank-Broadley for the Royal Mint and British coins, and is also used in Australia, New Zealand, and throughout the commonwealth.

Located in the state of Western Australia, the Perth Mint is the oldest operating mint in the nation. It opened in 1899 as the final Royal Mint facility constructed on the continent, and today it operates independently of the Royal Australian Mint in Canberra.

If you have any questions about buying silver, please contact Silver.com. Our customer service associates are available at 888-989-7223, online through our live chat, and via our email address.