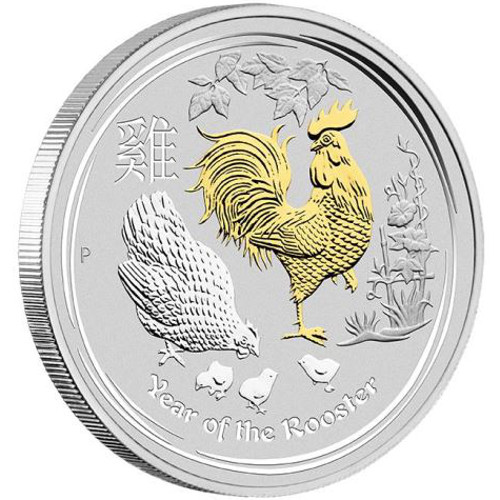 Each of these 2017 1 oz Silver Australian Rooster Coins has a 24-karat gold layering on the rooster image on the reverse face of the coin. These coins are all in BU condition. Coins in this condition exhibit no signs of wear and tear, though you may notice minor flaws such as breaks in the luster, spotted surfaces, or contact marks from the coining process.

Lunar Series II is a 12-coin release from the Perth Mint that follows the 12-year cycle of the Chinese Lunar calendar. The animals of the Zodiac appear once every 12 years, and their characteristics and personality traits are said to be passed on to the individuals born under a specific sign.

On the reverse of all Silver Australian Rooster Coins you’ll find the 2017 Year of the Rooster design. As mentioned earlier, it includes a male rooster along with a hen and three chicks pecking for food on the ground. The rooster on the design is the only element with 24-karat gold layering on this gilded finish.

The obverse of the 2017 1 oz Silver Australian Rooster Coin has Queen Elizabeth II’s effigy. Her Majesty’s portrait has appeared on all Australian coinage since 1952. This 1998 depiction from Ian Rank-Broadley represents the fourth-generation image of the Queen to appear on Australian coinage.