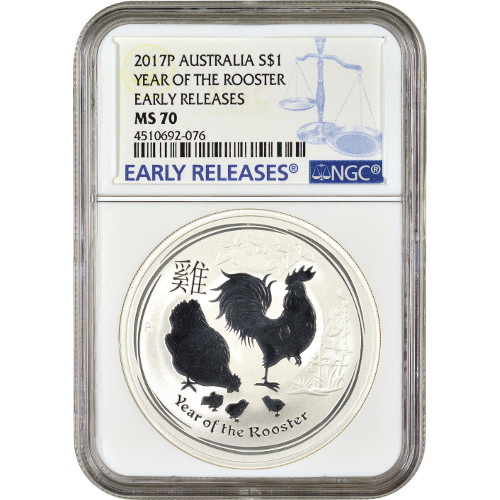 The Silver Australian Rooster Coin is the silver bullion version of the 2017 release in the Lunar Series II program. The second major lunar-themed coin series from Perth Mint, these are highly coveted among collectors due to their changing designs. Right now, the 2017 1 oz Silver Australian Rooster Coin is available in perfect condition from Silver.com.

All 2017 1 oz Silver Australian Rooster Coins in this product listing are in perfect condition according to the NGC. Coins in MS70 condition have full original mint luster, and exhibit no detracting flaws of any kind.

The reverse of the Silver Australian Rooster coin includes the image of a male rooster standing amidst bamboo foliage, head up and alert. Meanwhile, a hen and three small chicks are depicted standing nearby pecking for food on the ground. The rooster image on this coin is unique to the silver releases in the series.

On the obverse of the 2017 1 oz Silver Australian Rooster is the design of Queen Elizabeth II’s portrait. Captured in right-profile relief and designed in 1998 by Ian Rank-Broadley, this depiction of the Queen is the fourth-generation image to appear on British, Australian, and commonwealth coinage.

Lunar Series II is a 12-coin release schedule from the Perth Mint that follows the 12-year cycle of the Chinese Lunar Calendar, with each new release matching the animal featured that year on the Zodiac.

The Perth Mint was founded in 1899 as the third and final Royal Mint facility in Australia. Originally under British control, today it is owned by the state of Western Australia and operates independently of the Royal Australian Mint in Canberra.

If you have any questions, please don’t hesitate to ask. Silver.com associates are available at 888-989-7223, you can connect with us online using our live chat, or simply send us an email with your inquiries.