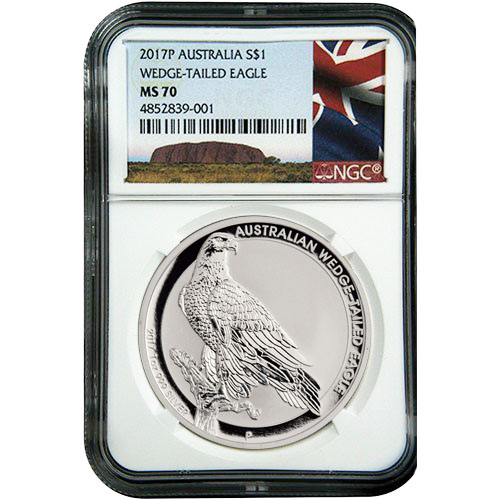 The Silver Australian Wedge Tail Eagle coin marks an impressive collaboration between former US Mint Chief Engraver John Mercanti and the Perth Mint. Mercanti began his career at the Philadelphia Mint in the 1970s and served as the Chief Engraver from 2006 to 2010 when he retired from the mint. One of his greatest works was the heraldic eagle on the reverse of the Silver American Eagle coins.

On the reverse of the 2017 1 oz Silver Australian Wedge Tail Eagle coin, you’ll find the image of a powerful and massive wedge tail eagle sitting on its perch. The bird is featured along with engravings of the coin series name, year of issue, metal content, purity, weight, and the “P” mint mark of the Perth Mint.

The wedge tail eagle is one of 12 species of eagle found in the booted eagle family. The birds are common across the Australian continent and are also found on nearby island nations include New Guinea, Papua New Guinea, and Indonesia. The birds are easily identified by their distinctive wedge-shaped tail feathers.

Queen Elizabeth II features on the obverse of all 2017 Silver Australian Wedge Tail Eagle coins. This is the fourth-generation portrait of the Queen to feature on British and Commonwealth coins since 1953. This design was created by Ian Rank-Broadley in 1998.

We encourage Silver.com customers to contact us at 888-989-7223 with questions. You can also connect with us live online using our chat service and email address. Don’t forget to use our silver charts to track changes in silver prices!