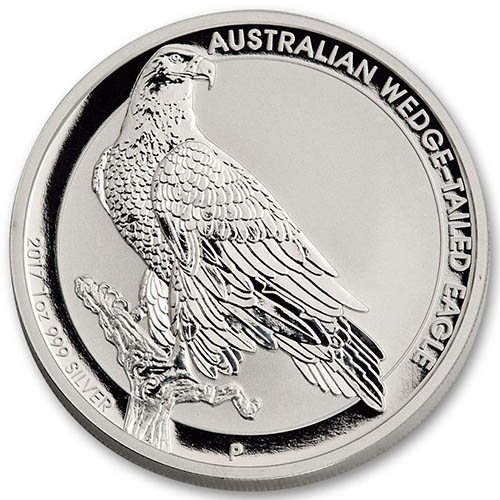 The wedge tail eagle, or wedged-tail eagle, is the largest predatory bird on the Australian continent. Though prominent in Australia, the species is not endemic to the continent and can be found in southern New Guinea, portions of Papua New Guinea, and Indonesia as well. The bird is notable for its long, broad wings and the unmistakable wedge shape to its tail which gives it the name.

The Perth Mint and John Mercanti entered into a working relationship in 2015 to create designs for the new Silver Australian Wedge Tail Eagle coin. The coins debuted in 2015 and for the first two years, the same design was used on the reverse of the coins. Starting in 2017, the Silver Wedge Tail Coins received a refresh on the reverse design with each new release.

On the reverse of the 2017 1 oz Silver Australian Wedge Tail Eagle Coin is the image of a massive wedge tail eagle sitting on the top of a broken tree branch. The bird has its wings resting at its sides as it gazes out at its surroundings.

The obverse of the 1 oz Silver Australian Wedge Tail Eagle coin features the right-profile portrait of Queen Elizabeth II. Her Majesty is shown here in a fourth-generation design which was originally created for the Royal Mint of England in 1998 by designer Ian Rank-Broadley.

We encourage Silver.com customers to contact us at 888-989-7223 with questions as they buy silver. You can also connect with us online through our live chat and email address features.