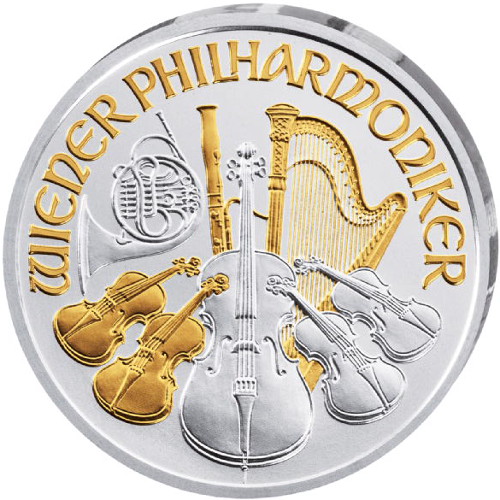 Each of the 2017 Silver Austrian Philharmonic Coins in this product listing is in BU condition. Coins in BU condition exhibit no signs of wear and tear on the surfaces, though you may notice a variety of minor flaws limited to breaks in the luster, spotted surfaces, or contact marks from the coining process.

Additionally, these Silver Austrian Philharmonic coins ship to you with a beautiful gilded finish. Gilded coins have a 24-karat gold layer applied to certain aspects of the design field, usually limited to one side of the coin. In this case, the Silver Philharmonics have gilded layers on some of the instruments of the reverse.

On the reverse of the 2017 Silver Austrian Philharmonic is the collection of musical instruments used by the Vienna Philharmonic Orchestra. Formed in the 1840s, the group is often regarded as the finest orchestra in the world. The design in use on these coins was created in 1989 by Thomas Pesendorfer, Chief Engraver of the Austrian Mint.

The obverse of the Silver Austrian Philharmonic coin includes a depiction of the pipe organ found inside the Golden Hall of the Musikverein. The home theater of the orchestra, it is located in the Innere Stadt neighborhood of the capital city of Vienna.

If you have any questions, please don’t hesitate to ask. You can reach Silver.com customer service at 888-989-7223, connect with us online through our live chat, or send us an email.