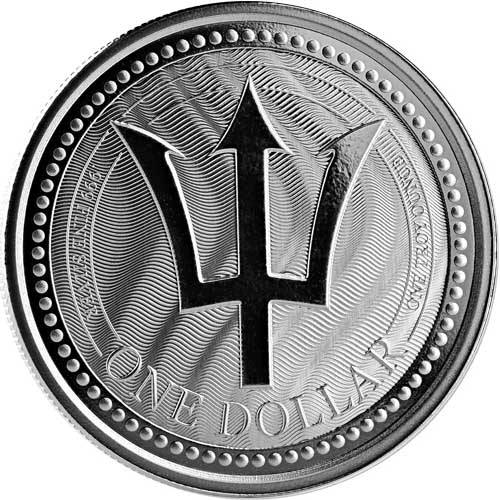 There’s an all-new option from Scottsdale Mint for those investors purchasing 1 oz silver coins. The new Barbados Trident Coin is the latest limited-issue bullion coin from Scottsdale struck for a foreign nation, following in the footsteps of those for African nations as well as the new Cayman Islands Marlin coin. The 2017 1 oz Silver Barbados Trident Coin is available to you online now at Silver.com.

Scottsdale Mint’s previous coin series for nations in Africa and the Cayman Islands of the Caribbean have focused on national wildlife, but the Barbados Trident Coin breaks with that tradition in favor of national symbolism.

As an island nation perched at the very eastern edge of the Lesser Antilles, with the Caribbean to its west and the vast Atlantic Ocean to its right, water has played a key role in the history of Barbados. The trident itself appears on the national flag, while the broken shaft of a trident appears on the coat of arms.

To deter counterfeiting of coins, the 2017 1 oz Silver Barbados Trident Coin features detailed background effects. On the reverse, you’ll find the smooth waves of the ocean across the background as subtle lines. The obverse has a brushed finish that adds a rough appearance to the coin’s visuals.

On the reverse of the Silver Barbados Trident Coin is the head of a trident, a three-pronged spear fishing tool or polearm for battle. The trident was considered the primary weapon and tool for controlling the seas used by the Roman god Neptune, who was god of freshwater and the seas.

The obverse of the 2017 1 oz Silver Barbados Trident Coin includes the image of the national coat of arms. This includes the crest in the center, with native wildlife on either side, and a banner below with the national motto of “Pride and Industry.” Above it an arm extends upward with the broken shaft of a trident in its hand, symbolizing the nation’s break from the rule of the United Kingdom.

Scottsdale Mint is a private minting facility in the United States that specializes in the production of silver bullion products using environmentally friendly processes.

We encourage all Silver.com customers to contact us with questions. You can reach us by phone at 888-989-7223, connect with us online through our live chat, or simply send us an email with your inquiries.