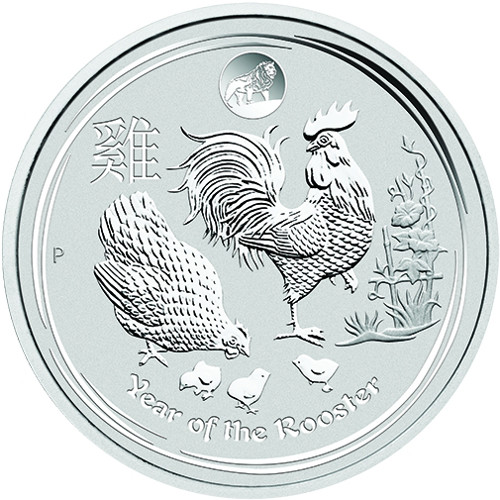 Each 2017 1 oz Silver Australian Rooster coin in this listing is in BU condition. Silver coins in BU condition exhibit no signs of wear and tear, though you may notice a range of minor flaws including breaks in the luster, spotted surfaces, and contact marks from the coining process at the mint.

The Year of the Rooster coin is the 10th release of the Lunar Series II coin program. Introduced in 2008, it follows the popular Lunar Series I program but offers new designs in each of the 12 planned gold and silver coin releases.

In this particular release of the Silver Australian Rooster, the Perth Mint has added a beautiful Bavarian Lion privy mark to the coin’s reverse design. The Bavarian Lion symbolizes the courage, valor, strength, and bravery of the region of Bavaria. Henry the Lion, duke of Saxony and Bavaria, was the most powerful German prince of his day and launched the use of the lion in German coat of arms when he founded Munich in 1158.

On the reverse of the 2017 1 oz Silver Australian Rooster Coin you’ll find the image of a family of chickens, led by a tall rooster. Included in the design is a hen and three small chicks foraging among the bamboo foliage and flowers of China. Engravings includes “Year of the Rooster,” the “P” mint mark, and the Chinese symbol for rooster.

The obverse of all Silver Australian Rooster Coins bears the right-profile portrait of Queen Elizabeth II. This image is a fourth-generation depiction of Her Majesty that was created by Ian Rank-Broadley in 1998.

Perth Mint is Australia’s oldest operating facility. Originally opened in 1899 as the final of three Royal Mint facilities, it is the last remaining facility from that system. Today, it is owned by the state government of Western Australia and operate autonomously of the federal government’s Royal Australian Mint in Canberra.

If you have any questions, please don’t hesitate to ask. Silver.com associates are available at 888-989-7223, on the web using our live chat, and via our email address. You can even visit our website to find today’s silver price.