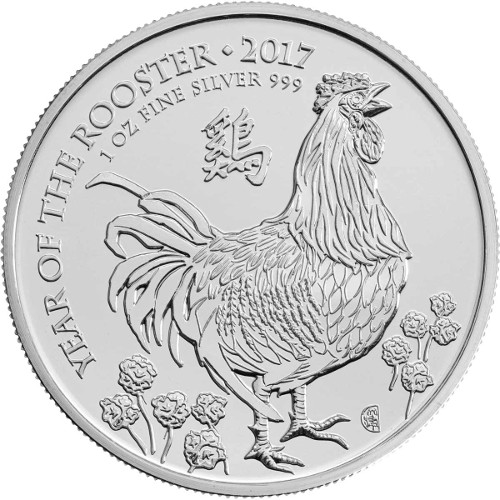 The Royal Mint is one of the leading producers of lunar-themed coins each year. Its unique Shengxiao Series is one of just a handful offered by sovereign mints celebrating the impact of Chinese culture around the globe. Today, the 2017 1 oz Silver British Rooster Coin is available in BU condition on Silver.com.

Lunar-themed coins have only increased in popularity in the last two decades following the 1996 release of the first Lunar Series from the Perth Mint in Australia. The Royal Mint’s Shengxiao Series, its own themed series with Zodiac-inspired designs, debuted in 2014 with the Year of the Horse.

Shengxiao Series coins are all designed by Wuon-Gean Ho, a British-Chinese citizen who fuses British and Chinese culture together in each of the designs for the popular series of coins. Available in both gold and silver, the Royal Mint’s imagery in the Shengxiao Series is one of a kind.

The reverse side of each 2017 1 oz Silver British Rooster Coin includes the unique Year of the Rooster design, and bears engravings that read “Year of the Rooster,” “2017,” and include the Chinese symbol for rooster.

On the obverse is the latest image of Queen Elizabeth II. Jody Clark created this fifth-generation portrait of Her Majesty in July 2015, and at the age of 33 he became the youngest Royal Mint engraver and artist ever to create a portrait of the Queen for coinage.

Each 2017 1 oz Silver British Rooster Coin in this Silver.com listing is a Brilliant Uncirculated coin. You’ll notice no signs of wear and tear on the surfaces, though flaws such as breaks in the luster, spotted surfaces, and contact marks are possible.

The Royal Mint was founded in 886 by Alfred the Great as the London Mint. This marked the origin of the Royal Mint as a single institution, though multiple sites existed throughout the British kingdom until 1279.

Please direct your questions to a Silver.com associate at 888-989-7223. You can also connect with us live online using our web chat or send us an email with your inquiries.