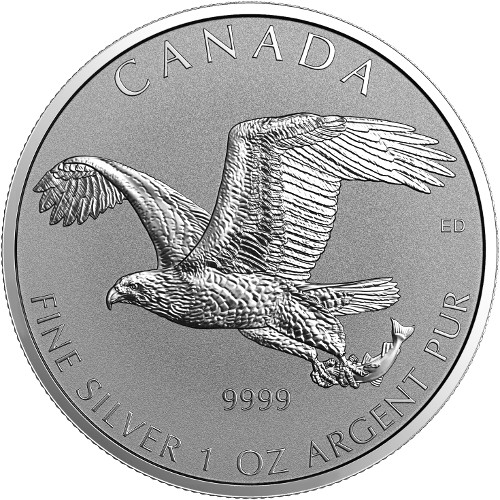 The bald eagle is one of the most revered creatures in North America. Chosen by the Founding Fathers of the United States as the official national emblem, this powerful bird roams the skies throughout North America from northern Mexico throughout the upper reaches of Canada. Today, the 2017 1 oz Silver Canadian Bald Eagle Reverse Proof Coin is available to you online at Silver.com.

Known around the world as a symbol of America, the bald eagle was chosen as the nation’s official emblem because of the majesty of its appearance, its powerful hunting abilities, and its longevity. Bald eagles have a large, hooked beak and are primarily brown in plumage with a white head and tail.

Despite the name, bald eagles are not actually bald. The use of the name bald eagle is derived from an older usage of the term to refer to someone who was “white headed.” The bald eagle appeared in the original Birds of Prey Series from the Royal Canadian Mint, and now reappears on the reverse proof striking of Birds of Prey designs on the 2017 1 oz Silver Canadian Bald Eagle Coin.

On the reverse of the 2017 1 oz Silver Canadian Bald Eagle Reverse Proof Coin you’ll find the image of the bald eagle. The bald eagle is an opportunistic feeder that lives primarily on fish captured by swooping down and snatching them from the water. The range of the bald eagle includes all of the contiguous United States, northern Mexico, Alaska, and Canada.

The Birds of Prey Reverse Proof Series is sure to sell out fast. While all designs in the previous series sold out quickly, the higher mintage of one million coins for each design meant supplies lasted longer. The Royal Canadian Mint has limited production in the reverse proof series to just 100,000 coins.

Please direct your questions regarding these coins to Silver.com. Our customer service team is available at 888-989-7223, online using our live chat, and via our email address. You can also visit our website at any time to view the latest updates on today’s silver price.