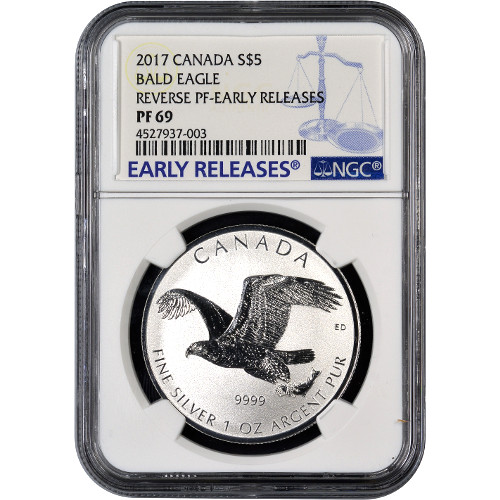 The Royal Canadian Mint is making it easy for those interesting in buying silver to find some of its greatest recent designs. Those who loved the original Birds of Prey Series have a second opportunity to get these beautiful coins with the release of all four designs again in a stunning reverse proof striking. The 2017 1 oz Silver Canadian Bald Eagle Reverse Proof Coin is now available to you online at Silver.com with NGC certification!

Original Birds of Prey coins were released for the first time in February 2014, and ran through August 2015. The four-coin series featured the Peregrine Falcon, Bald Eagle, Red-tailed Hawk, and Great Horned Owl. Emily Damstra, who first came to fame at the mint with the final two designs of the Canadian Wildlife Series, designed all four coins in the original series.

On the reverse of the 2017 1 oz Silver Canadian Bald Eagle Reverse Proof Coin you’ll find the image of the bald eagle. The bald eagle is an opportunistic feeder that lives primarily on fish captured by swooping down and snatching them from the water. The range of the bald eagle includes all of the contiguous United States, northern Mexico, Alaska, and Canada.

Each of the 2017 1 oz Canadian Silver Bald Eagle Reverse Proofs in this listing earned PF69 grades from the NGC. Coins in this condition are considered near-perfect, with full, original mint luster still present. However, there are also a minimum of two minor detracting flaws, which are limited to minuscule hairlines or contact marks outside the primary focal areas.

To earn the Early Release designation, these Royal Canadian Mint coins must arrive at the NGC for certification within 30 days of the initial release date as set by the mint. A reverse proof coin features strong, frosted matte background fields with a deeply-mirrored, clear finish to the design set.

We encourage Silver.com customers to contact us with questions. You can reach our team members at 888-989-7223, chat with us live online, or simply send us an email.