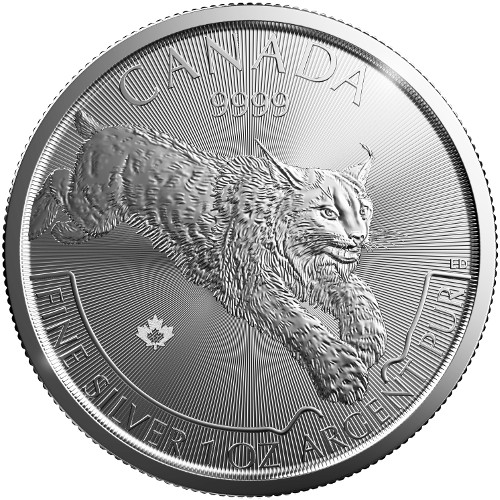 The lynx is a medium-sized predatory cat found throughout the North American continent, but mostly in the boreal forests of Canada and the US state of Alaska. The animals are found in many of the northern US states as well, but the further south one travels the lesser the lynx population becomes. Right now, the 2017 1 oz Silver Canadian Lynx Predator Series Coin is available to purchase online at Silver.com.

Each 2017 1 oz Silver Canadian Lynx Predator Series Coin is available in BU condition. Coins in this condition exhibit no signs of wear and tear, though you may notice a range of minor flaws including breaks in the luster, spotted surfaces, and contact marks from the coining process at the mint.

The Lynx design in the Predator Series of silver coins from the Royal Canadian Mint represents the second release of the program. Debuting in 2016 with the Cougar coin, each of these .9999 pure silver coins features a new design and there will be a total of four designs released, with one design set for release each year in February.

On the obverse of the 2017 1 oz Canadian Silver Lynx Predator Series Coin is the image of Queen Elizabeth II, created by Susanna Blunt. This 2003 depiction is encircled by engravings of her name, the coin’s face value, the phrase “D.G. Regina,” and the year of issue for the coin.

The reverse of the coins includes the all-new design of a Lynx from Damstra. It depicts the elusive medium-sized cat as it prepares to pounce on one of its potential victims. Engravings include the nation of issue, purity, metal content, and weight of the coin. Like other predatory wild cats, lynx are solitary animals and as nocturnal beasts, they do most of their hunting at night.

Each of these coins is a product of the Royal Canadian Mint. Founded in 1908 as the sovereign mint of Canada, the RCM produces circulation currency and commemorative coinage for the nation out of its Ottawa and Winnipeg facilities.

If you have any questions, please feel free to reach out to Silver.com. Our customer service team is available at 888-989-7223, online using our live web chat, and via our email address. You can also view silver prices for today on our website at anytime!