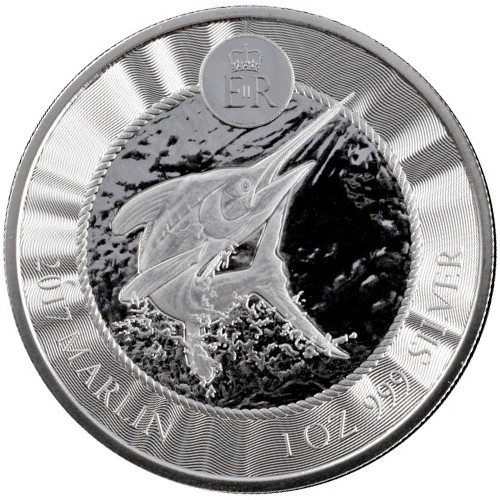 Deep-sea fishermen throughout the Caribbean Sea are familiar with the hassle of hauling in the powerful marlin. A symbol of the turquoise blue waters of the Caribbean, this beautiful fish is captured in its full glory on the reverse of a brand-new silver bullion coin for the Cayman Islands from Scottsdale Mint. The 2017 1 oz Silver Cayman Islands Marlin Coin is available to you today online at Silver.com.

The Cayman Islands are a known tax-haven location in the Caribbean Sea. The small island nation consists of three islands in total: Grand Cayman, Cayman Brac, and Little Cayman. The islands have a total population of 60,000 people and a capital city located in George Town, with a famous status of having more corporations located in the islands than full-time residents.

Each of these new 2017 1 oz Cayman Islands Marlin Silver Coin is meant to replace the popular Silverback Gorilla bullion coins from Scottsdale Mint, previously available in 2015 and 2016. The new coins represent the Caribbean island of the Cayman Islands, which exist as a British Overseas Territory.

On the reverse of all 2017 1 oz Cayman Islands Marlin Silver Coins features the image of a massive marlin as its crests the surface of the ocean’s waters. Marlins have elongated bodies with a spear-like snout and a long, rigid dorsal fin running along the upper portion of their back.

All 2017 1 oz Silver Cayman Islands Marlin Coin has a BU condition. Coins in BU condition show no signs of wear and tear, though you may notice minor flaws such as the existence of breaks in the luster, spotted surfaces, or contact marks from the striking of blanks during production at the mint.

We encourage all Silver.com customers to reach out to us with questions. You can reach our customer service team on the phone at 888-989-7223, chat with us live online, or simply send us an email. Feel free to visit our website at any time to research other silver coins for sale!