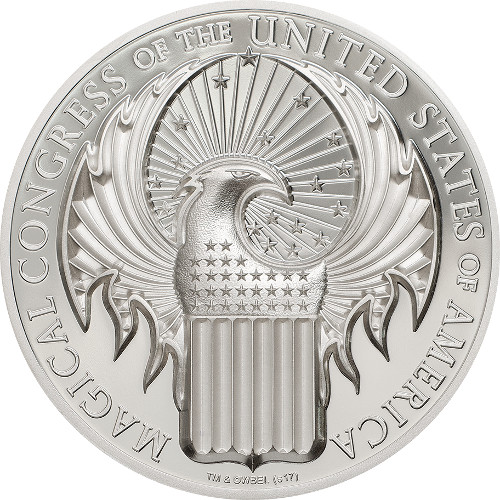 Feature films have provided a great deal of inspiration to precious metal designers in recent years, with comic-themed coin programs releasing in conjunction with films such as Captain America: Civil War and Batman v. Superman. Now, the world of Harry Potter grows with the release of the feature film Fantastic Beasts and Where to Find Them. You’ll now find a coin to go along with that release in the form of the 2017 1 oz Silver Cook Islands Fantastic Beasts and Where to Find Them Coin, available online now at Silver.com.

Fans of the Harry Potter wizarding world may have breathed a frustrated sigh when the final book and film debuted, but it’s time to return to that wonderful world where magic is possible with the release of the feature film Fantastic Beasts and Where to Find Them. The film starts in 1926 when New Scamander has completed a global excursion in search of magical creatures, and arrives in New York for a stopover on the trip. With the escape of some fantastic beasts, the wizarding world in the US collides with the muggle world.

The reverse of the 2017 1 oz Silver Cook Islands Fantastic Beasts and Where to Find Them Coin includes the seal of the M.A.C.U.S.A. Featuring the image of a bird with its wings wide spread and the heraldic shield of the US, the symbol stands for the Magical Congress of the United States, which governs the wizarding population of the US.

On the obverse of this Cook Islands coin includes the right-profile portrait of Queen Elizabeth II. Her Majesty has appeared on the obverse of all commonwealth coinage since 1952, and includes engravings of her name, the face value, nation of issue, and the year of issue.

These coins are high-relief strikings, which means that the coins are produced using numismatic presses with increased pressure. This results in a deep view to the design field that helps bring a sense of 3D finish to the design.

The 2017 1 oz Silver Cook Islands Fantastic Beast and Where to Find Them coin is a product of the BH Mayer Mint in Germany, a private minting facility that has been family-owned and operated since its founding in the 19th century.

Please direct your questions to Silver.com customer service. Our team members are available at 888-989-7223, online through our live chat, and via email.