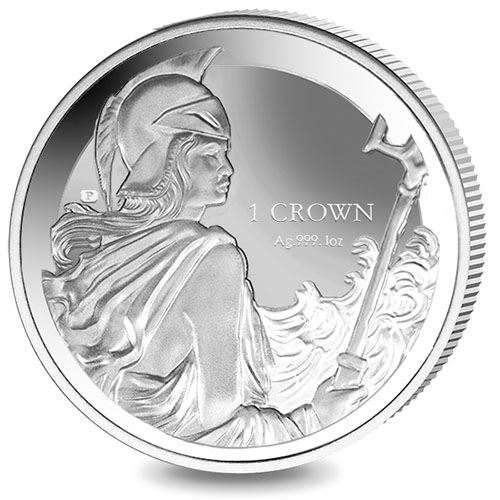 Any quantity available for $8.99 per coin over spot!

The Falkland Islands are an archipelago of islands consisting of two large islands and some 776 smaller islands. Controlled by various nations over its history, including Spain, France, and Argentina, the islands have been under the control of Britain since 1833. In 1982, Argentina invaded the islands to reclaim them but were met with a fierce response by Britain. Right now, the 2017 1 oz Silver Reverse Frosted Anniversary of Liberation Coin is available to purchase online at Silver.com to mark the 35th anniversary of the war’s end.

Each of the 2017 1 oz Silver Reverse Frosted Anniversary of Liberation Coins is available to you in BU condition. Coins in this condition exhibit no indications of wear and tear from handling. However, it is possible for minor flaws to result from the coining process. These potential flaws include breaks in the luster, spotted surfaces, and contact marks.

On Friday, April 2, 1982 the Argentine military invaded the Falkland Islands to reset the sovereignty of the islands. The conflict was the flashpoint in a longer confrontation over the islands and their control. After 74 days, the British Navy and Marine Forces had engaged the Argentines and completed an amphibious assault to retake the islands and remove the Argentines.

The 2017 1 oz Silver Reverse Frosted Anniversary of Liberation Coin is available from Pobjoy Mint to mark the 35th anniversary of the Falklands War. The final Argentine’s surrendered on June 14, 1982 and Britain reasserted control over the islands.

On the reverse of the Anniversary of Liberation Coin you’ll find the image of Britannia. A national symbol for Britain, the patriotic British song “Rule, Britannia!” originated from a song created by James Thomson and set to music in 1740 by Thomas Arne. The song has been a favorite of the Royal Navy, and given the navy’s role in the Falklands War, Britannia was a natural choice for the coin.

The obverse of the 2017 1 oz Silver Reverse Frosted Anniversary of Liberation Coin is available with Queen Elizabeth II’s effigy. This is the right-profile portrait of Her Majesty created by Pobjoy Mint and used on its coinage, featured along with a “PM” mark for the mint.

Located in Surrey, England, Pobjoy Mint was established in 1965 by the Pobjoy Family and has grown to become the largest privately owned mint in Europe.

If you have any questions about these silver coins for sale, please contact Silver.com. You can contact us at 888-989-7223, chat with us live online, or email us.