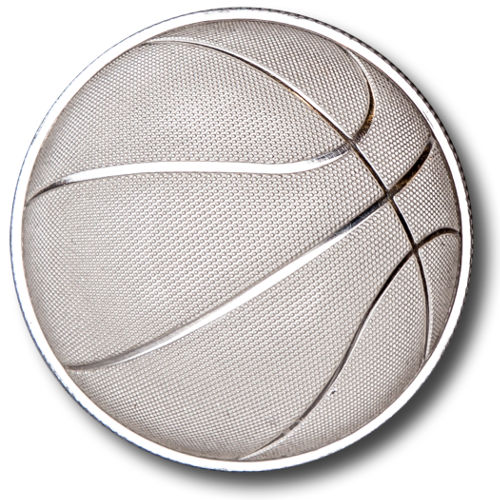 Monarch Precious Metals is often associated with producing old-fashioned silver and gold bars using traditional refining techniques. However, their business model also includes the production of silver rounds. One of their latest offerings is a departure from the production style of its bars, and is a first-time offering of 3D round design. Right now, the 2017 1 oz Silver Monarch Domed Basketball Round is available to purchase online at Silver.com.

Each individual silver die is hand-fed into the press at Monarch Precious Metals and struck three times to create the 3D surface of the reverse, as well as the fine details of both sides. The 3D structure of the silver rounds rises roughly .25 inches high.

The Basketball Domed Round was the first release of a 3D, domed round from Monarch Precious Metals when it debuted in 2016. It was followed by Soccer Ball and Baseball rounds, and continues with these 2017-issue rounds. The collection from Monarch Precious Metals is the most time-intensive and technologically challenging product the mint has produced. The silver blanks used in production are hand-loaded into the coining presses at Monarch and struck three times to create the 3D appearance of the rounds.

On the Reverse side of the round is the convex image of a basketball. The 3D, domed appearance gives the viewer the impression of a basketball bouncing up at them, complete with matte finishes on the ball panels and mirrored finishes on the seamlines. Basketball was invented in 1891 by Dr. James Naismith, a physical education professor and instructor at the International Young Men’s Christian Association Training School, better known as the YMCA.

The obverse face of the round has a concave design that depicts the image of a player rising high to dunk the ball in the hoop during the course of play. Engravings include the weight, purity, and metal content of the round, as well as a striking of the year of issue and the Monarch Precious Metals mint mark.

Monarch Precious Metals was founded in the Rogue Valley of southern Oregon in 2008. Aside from these new silver rounds, it produces silver and gold bars with minimum fineness of .999 and uses hand-poured techniques in all of its bar production.

If you have any questions, please feel free to contact Silver.com. We’re available on the phone at 888-989-7223, and online using our live chat and email address.