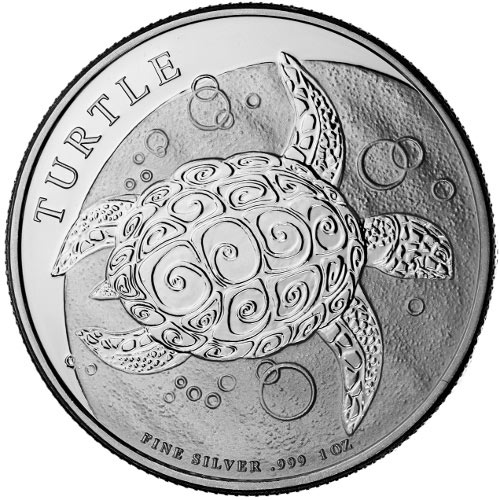 The hawksbill turtle is so-named for its pointed, sharp beak, and is beloved throughout the South Pacific for its brightly colored shell pattern. A resident of warm waters throughout the tropical climates of the Atlantic, Indian, and Pacific Oceans, the hawksbill migrates annually from Fiji to New Zealand. The 2017 1 oz Silver Niue Hawksbill Turtle Coin is available to you online today at Silver.com.

The Hawksbill turtle is found in tropical waters throughout the Atlantic, Indian, and Pacific Oceans. In this region in particular, they are typically found around the shores of Fiji, except for making their annual trips to the northern shores of New Zealand. Once a delicacy in the region, local populations have now rallied to protect the species as its numbers in the wild dwindle.

Introduced in 2010 as the Silver Fiji Taku, this bullion coin from the New Zealand Mint quickly gained traction in the global precious metals market. Investors appreciated the purity, while collectors loved the design. The program ceased production as a Fiji-issued coin after 2013, and relaunched in 2014 as the Niue Hawksbill coin.

The design of the coin remained largely unchanged. The reverse face continued to feature the hawksbill turtle, a native species found throughout the South Pacific. The obverse reverted back to the use of a Queen Elizabeth II’s effigy.

On the obverse of the 2017 1 oz Silver Niue Hawksbill Turtle Coin you’ll find the image of Queen Elizabeth II, captured in right-profile relief by Ian Rank-Broadley. This design is the fourth-generation depiction of Her Majesty on British coinage and has been in use since 1998.

Each of the 2017 1 oz Silver Niue Hawksbill Turtle Coins in this listing is in BU condition. Coins in this condition have no signs of wear and tear on the surfaces, though you’ll notice the presences of minor flaws ranging from breaks in the luster and spotted surfaces to contact marks from the coining process at the mint.

We encourage all Silver.com shoppers to contact us with questions. You can reach our customer service team on the phone at 888-989-7223, or connect with us online using our live chat and email features.