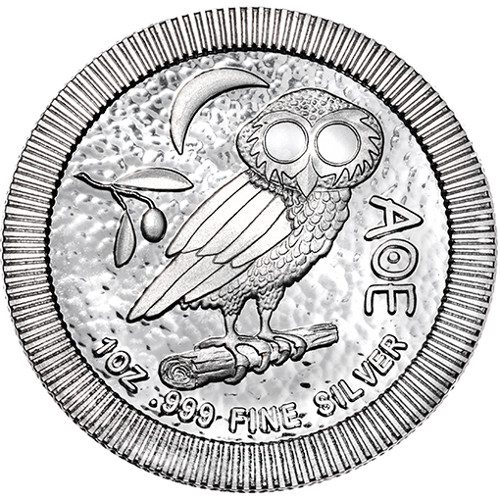 If you ever wondered why the owl was associated with knowledge, wisdom, and perspicacity throughout Western civilizations, you need look no further back in time than the Greek civilizations and their mythology. In Greek mythology, the goddess Athena had an owl present with her at all times, and she was the goddess of wisdom. Right now, the 2017 1 oz Silver Niue Athena Owl Coin is available to purchase online at Silver.com.

Each of the Silver Athena Owl coins in this product listing is in BU condition. Coins in BU condition exhibit no signs of wear and tear, however you may notice a range of minor flaws including breaks in the luster, spotted surfaces, and contact marks from the coining process.

The design features of the reverse side of the 2017 1 oz Silver Niue Athena Coin come from the silver tetradrachm coin. Available on display still at the Museum of Fine Arts of Lyon, the coins were in circulation between roughly 480 and 420 BC, and featured the image of an owl with Greek inscriptions. The engravings read “Of the Athenians” in modern English.

This image of the “Owl of Athena” comes from the classical world in which the virgin goddess of wisdom was said to be accompanied by a little owl. The unique finishes of this coin, including its hammered background field and mirror finish on the owl’s eyes create a different take on this traditional coin.

On the reverse of the 2017 1 oz Silver Niue Athena Owl Coin is the image of the owl exactly as found on the original Greek coin. The owl is featured from its right-profile side, with its mirror-finish eyes reflecting the nocturnal binocular vision and overall wisdom of the creature. The owl rests upon a tree branch, with the an olive branch to the left and a crescent moon above its head, as well as the original Greek letter engraving.

The obverse of all 2017 1 oz Silver Niue Athena Owl Coins you’ll find the familiar right-profile portrait of Queen Elizabeth II. In use on commonwealth coins since her ascension to the throne of England in 1952, Her Majesty’s portrait on these coins comes from Ian Rank-Broadley, and was designed in 1998 as the fourth-generation depiction.

If you have any questions, please don’t hesitate to ask. Silver.com customer service associates are available at 888-989-7223, online using our live chat, and via our email address.