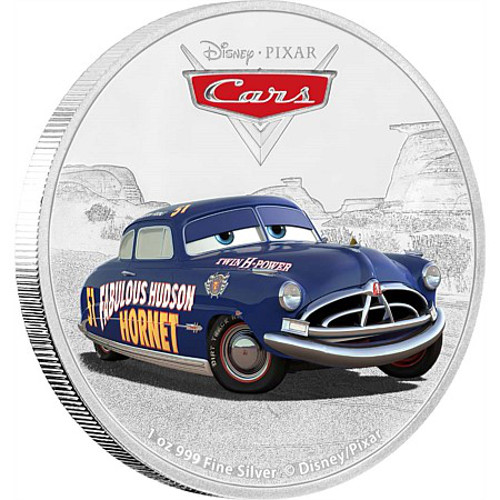 A decade after the animated film generated $462.2 million dollars at the worldwide box office, the New Zealand Mint offered fans of the Disney animated feature film franchise with proof silver coins bearing the images of some of the major characters from the Cars franchise. By 2017, two sequels had produced and introduced by Disney. The 2017 1 oz Proof Silver Niue Disney Cars Doc Hudson Coin is now available to you for purchase online at Silver.com.

The 1 oz silver coins available in the Cars Series from the New Zealand Mint focuses on the four major characters from the first film in the franchise. Released in late 2006, Cars focused on the relationships between a brash newcomer to the racing circuit, Lightning McQueen, and the residents of the small town of Radiator Springs.

McQueen finds himself lost while traveling from one race to the next overnight along US Route 66. He winds up in legal trouble in Radiator Springs. Sally Carrera is a local lawyer trying to get McQueen stuck with community service while the affable Tow Mater befriends the modern race car. Presiding over the proceedings is Doc Hudson, a doctor and town lawyer who formerly raced as the Fabulous Hudson Hornet on the same Piston Cup Circuit McQueen is now taking by storm.

On the reverse of the 2017 Proof Silver Niue Disney Cars Doc Hudson Coins is the image of the Fabulous Hudson Hornet in his full paint job from his racing days. Doc has a deep distrust of McQueen throughout most of the film, but slowly begins to warm up to him when he realizes that the youngster can, and will, learn some things from him. By the end of the film, Doc serves as McQueen’s crew chief for the big race. Doc Hudson was voiced in the original film by veteran Hollywood actor Paul Newman.

The obverse of the 2017 1 oz Proof Silver Niue Disney Cars Doc Hudson Coins includes the fourth-generation effigy of Queen Elizabeth II from Ian Rank-Broadley. Created in 1998, the right-profile portrait featured on British coins until 2016, Australian coins through 2018, and is still in use on Commonwealth coins.

These 2017 1 oz Proof Silver Doc Hudson Coins are available inside of clear Perspex cases that allow you to see both design fields while keeping the coin sealed. The case is shipped in a Cars-themed shipper with a Certificate of Authenticity.

Silver.com customer service is available to answer your questions at 888-989-7223. You can also connect to us online through our live chat and email.