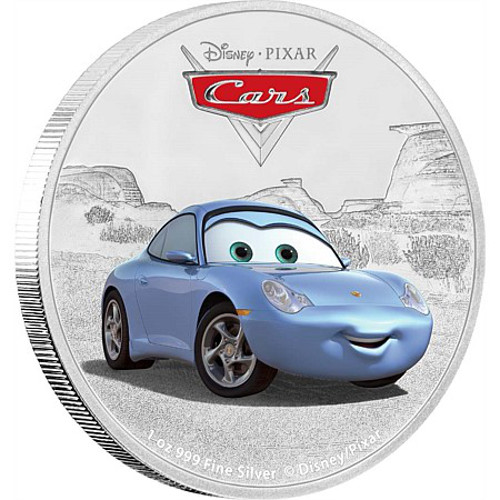 The Cars franchise of animated feature films launched with the 2006 debut of the first film, Cars. From there, two subsequent films focused on the four-wheeled adventures of the main characters have been produced, as well as a spinoff that took the series airborne in Planes. The 2017 1 oz Silver Niue Disney Cars Sally Proof Coin is part of the New Zealand Mint’s Disney Cars collection and is now available to you online at Silver.com.

Sally is a Porsche in the Cars franchise and plays the role of a love interest for Lightning McQueen. From the moment they first meet, you can tell there’s an awkward spark in the air as she confronts McQueen in court not as his defense attorney, as he suspects, but as the local prosecutor in Radiator Springs set to punish him for his path of destruction in the town.

The background story on Sally is unique, like most of the characters. Once a high-powered lawyer in Los Angeles, she now bides her time as a small town prosecutor and the owner of a motel in Radiator Springs. Over time, McQueen’s brash attitude is softened by the positive attitude of Sally.

The reverse of each silver coin in this listing has a colorized image of Sally, with background imagery of the desert outside of Radiator Springs featured in the design. The Cars film logo is above along with the names of Disney and Pixar, the companies behind the film.

On the obverse of all the coins in this collection include the popular right-profile portrait of Queen Elizabeth II. Her Majesty is featured on this coin in the 1998 depiction from Ian Rank-Broadley, which serves as the fourth-generation image of the Queen on British and commonwealth coinage.

Each of the 2017 Silver Niue Sally Proof Coins in this listing arrives inside of a Perspex case for beautiful display and long-term protection, and is shipped inside of a Cars-themed artistic shipper with colorized imagery of Sally and the film’s setting in Radiator Springs. Included with your purchase is a numbered Certificate of Authenticity.

We encourage all Silver.com customers to contact us at 888-989-7223 with questions. You can also reach out to us online using our live chat and email address. A full listing of silver for sale is available through our online catalog!