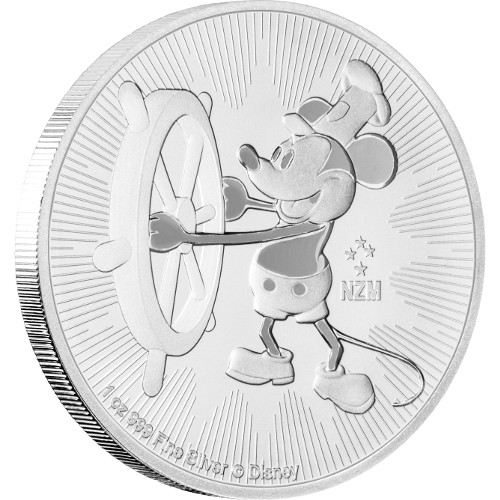 Mickey Mouse is one of the most beloved cartoon characters of all time, and is also one of the most consistent in number of appearances over the past 90 years. The anchor of the Disney franchise, Mickey Mouse first appeared in grainy black-and-white cartoons in the late 1920s. Paying homage to his first appearance, the 2017 1 oz Silver Niue Mickey Mouse Steamboat Willie Coin is available to purchase online today at Silver.com.

The New Zealand Mint is one of the world leaders in the production of character coins, and no lineup of coins from the mint has proven more popular in the past few years than its selection of Disney-themed coins. When it comes to Mickey Mouse, the 90-year-old icon’s career started with the magic of Steamboat Willie.

The film’s most iconic moment to this day is Mickey piloting the steamboat himself, when in reality the actual captain of the barge is Mickey’s long-time nemesis Pete the cat. Minnie makes an appearance in the film running to catch the boat when it stops at Podunk Landing to pick up a load of livestock.

On the reverse of the 2017 1 oz Silver Niue Mickey Mouse Steamboat Willie coin you’ll find that iconic moment from Mickey’s turn as captain of the steamboat. The film is ranked 13th in the book of The 50 Greatest Cartoons and is on the National Film Registry as a “culturally, historically, or aesthetically significant” film.

The obverse of the Silver Niue Mickey Mouse Steamboat Willie coin includes the right-profile portrait of Queen Elizabeth II. Her Majesty appears on the obverse of all commonwealth coinage, and this particular design is the fourth-generation depiction created in 1998 by Ian Rank-Broadley.

Each 2017 1 oz Niue Mickey Mouse Steamboat Willie Silver Coin offered here is in BU condition. Silver coins in this condition have no signs of wear and tear, though you may notice minor flaws ranging from breaks in the luster and spotted surfaces to contact marks from the production process at the mint.

The New Zealand Mint is a private coining facility in Auckland, New Zealand. It is not associated with the federal government, and neither produces official coinage nor paper bank notes for the country.

We encourage all Silver.com customers to call us at 888-989-7223, chat with us live online, or email us with questions. Feel free to visit our website any time for current silver price listings.